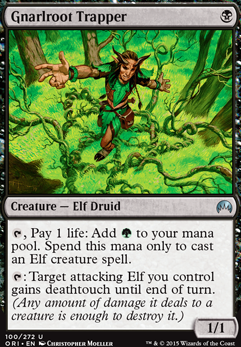 , Pay 1 life: Add to your mana pool. Spend this mana only to cast an Elf creature spell.

: Target attacking Elf you control gains deathtouch until end of turn. (Any amount of damage it deals to a creature is enough to destroy it.) 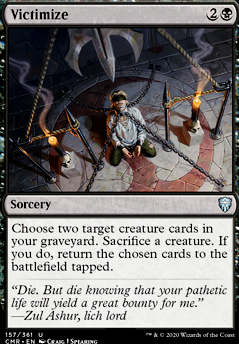 Have you thought about adding Gnarlroot Trapper

Expanding on whatLord_Olga mentioned there are more cards that could give you access to elf tokens to accelerate the win con.

Thanks for the suggestions! I agree this deck has been running a bit slow, and I'd definitely like to speed things up. I came into building this with the impression that "Well it's okay that it's a little slow, their hands are gonna be pretty much gone" which is not completely right.

I've taken in most of these suggestions to help them, the only differences being instead of putting in Herald of Anguish I'm going to keep Rhys the Exiled for his life gain (And only 1 Black Mana to keep him from dying should he be blocked), which after a Memory Jar combo you mentioned, would be at least 23 life. I'll take it.

Also, I'ma keep Gnarlroot Trapper in instead of the Elves of Deep Shadow simply because Trapper can give an Elf Deathtouch, which limits your opponent on what to block with, out of a desire to keep certain creatures alive. I agree the Mana ability is nowhere near Deep Shadow's ramp, but to me that Deathtouch is worth it in threat.

Finally, I actually used to have Elvish Harbinger in this deck alongside Quirion Elves, but I switched out Ms. Elf Tutor for Diabolic Tutor (I think we can agree would be the more useful tutor in this deck). I would NOT mind putting her back in to tutor for something like i dunno, Rhys the Exiled, however I don't wish to replace Quirion Elves specifically with her.

EDIT: I've decided to replace Memory Jar with her and stick it into the Maybeboard. It's a VERY useful card but it's pretty damn pricey, so it'll sit there to be bought at a point after I've bought this deck in full. In the meantime, I've filled that slot with Elvish Harbinger, and am still looking to more suggestions from the TappedOut community.

I would suggest cutting: (worst at the bottom)

Now some cards i think should be in the deck: (worst at the bottom)

Some cards i think should be swapped: Gnarlroot Trapper > Elves of Deep Shadow. Simply better ramp.

Quirion Elves > Elvish Harbinger? I dunno. this feels like it's a upgrade but it's your deck.

Anyway I hope this helps with your deck!

From my play testing and looking at pro lists you can drop the land count to 18.

I would recommend 4Dwynen's Elite if you decide to do so.

How are you liking Nykthos, Shrine to Nyx. I have enjoyed Westvale Abbey  Flip in the utility land spot it can pull games out of nowhere.

Also just personal tech Gnarlroot Trapper can be a fun 1x to help a stall board.

I also really like Shaper's Sanctuary in the side. Maybe give it a test.