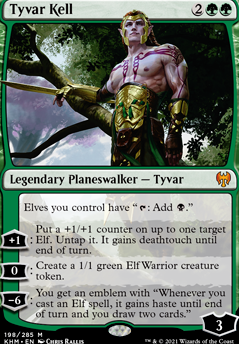 -6: You get an emblem with "Whenever you cast an Elf spell, it gains haste until end of turn and you draw two cards."

The Elven beatdown
by Kiyml39 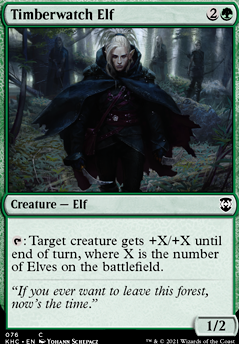 InzHornet4 on Advertise your MODERN deck!

Kiran_M Maybe try Tyvar Kell ? He would be a really great addition in my opinion.

Check out my new deck I just made! Any and all suggestions are appreciated!

Honigkuchenx Those are some excellent points, thank you for the response!

Hope that helps explain my thought process a bit more!

I have been playing BG Elves for quiet a while and my version looks a fair bit different. Here is some random thoughts & questions to start a discussion:

Got quiet a few more things, but will leave it at this to start.

I think it's probably not right to run a Chord of Calling package, but rather swap out those 5 slots for 4 Elvish Warmaster - which is a really good reason to be running elves at the moment - and the extra Llanowar Elves . I'm not seeing any modern Elves lists right now that aren't running the full 4 Warmaster; Chord is slow and you don't have silver bullets to get.

You could also put in a Tyvar Kell over the extra Llanowar Elves , I've seen some lists running 1-2 copies though I'm not sure what they're there to shore up really!

For the sideboard, I'd also recommend some number of Shapers' Sanctuary , I think you could fully cut Essence Warden (I assume is in there for... burn? but do you really need help against Burn?) and add 2 Shapers' Sanctuary and perhaps putting the Scoozes back in, which are great against Death's Shadow and Burn. I might also recommend Assassin's Trophy over Dismember .