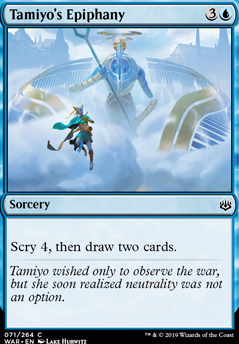 I was a bit surprised to see how few decks out there are focused around God-Eternal Kefnet as their commander. EDHREC only lists a few decks as being created under his commandership: only 157 at the time I am writing this. As it stands, the zombified version of Amonketâs blue God doesn't have a huge following. Even here on TappedOut, an advanced search of God-Eternal Kefnet returns results for about 200 decks, a lot of which will be brews or ideas never followed up upon.

Today, I hope to follow up further on Kefnet, and offer my own unique take: what does a Kefnet Turns deck look like on a budget?

**THE PERFECT PATH TO VICTORY

With God-Eternal Kefnet on the battlefield + Library of Leng , Scry and dig your way through your deck until youâre either to cast or cheat out Aminatou's Augury to cast Nezahal, Primal Tide . With the Elder Dinosaur on the battlefield, you can discard your extra turn spells to the top of your library (using Library of Leng) to cast infinite extra turn spells off Kefnetâs triggered ability.

This package is far from exhaustive, but it is more than enough to get the job done. Cards such as Karn's Temporal Sundering and Part the Waterveil remain incredibly affordable despite their high power level; Sundering in particular is criminally underrated. 6CMC extra-turn + bounce? In a format where you will rarely be without a legendary permanent is extremely good.

One of our other haymakers is Aminatou's Augury , which, when played, allows us to cast one of EACH type of nonland cards. This means we can easily get an extra turn for free, cast Nezahal, an artifact or a powerful enchantment such as Swarm Intelligence or Metallurgic Summonings to abuse our extra turn loops even further. It also hits our extra turn spells, and can cast our instant speed draw spells as well.

This deck has a very direct and specific path to victory. We want to be manipulating the top of the library, as well as drawing cards on other peopleâs turns so that we can make the most Kefnetâs trigger cards in this category not only help us draw, but also fix the cards on top.

This core strategy is devilishly easy to execute; often allowing you to chain together 3-4 extra turns by turn 5 or 6.

If youâre not operating on a budget; Sensei's Divining Top is going to bring the power level of this deck to full force on your opponents. But Scry and our utility spells does the purpose beautifully.

THE REST OF THE DECK

The rest of the deck is geared around filtering through our library, and protecting our pieces.

I expect this deck to go down in price as time goes on; obviously the extra-turn spells are always going to be pricey â but this deck by itâs very nature thrives via cards that offer a high reward for low cost; cards like Brainstorm remain affordable, and are a keen part of the deck.

Expect God-Eternal Kefnet to drop in coming months as well. Heâs still fresh of the boat as a mythic rare finisher for Standard control decks; it may happen earlier as more copies enter circulation on the secondary market, but expect it to definitely drop in price when it rotates out of Standard around this time next year. Nexus of Fate will be a good pick up for the list once it rotates out of standard as well.

For now, however, the price of the deck remains below the $100 dollar mark â Iâll keep an eye on it and continue to update the deck if any card spikes in price.

But there you have it! A budget turns deck that can consistency challenge to do silly, ridiculous extra-turn things! Itâs been a blast to play so far! I hope you all give it a go too â I think youâll be surprised how easy it is to pick up and go, go, go.

Will you be giving this deck a go? Whatâs your favourite extra-turns commander? Let me know in the comments!!