: Add to your mana pool. Spend this mana only to cast an instant or sorcery spell.

At the beginning of your upkeep, if there are three or more instant and/or sorcery cards in your graveyard, transform Curious Homunculus

Son of a Lich
by Alexmaths 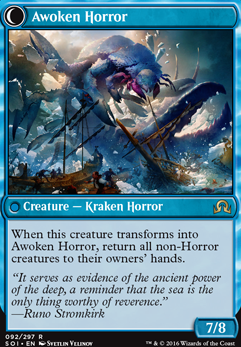 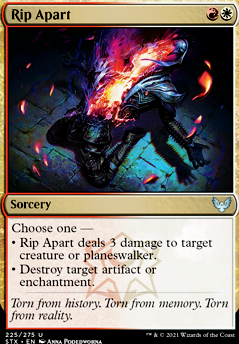 Hey dude i like your style! im a izzet fan so anything that goes there i like!...if you are running the Nivs i recommend you to use Curiosity , also Propaganda i think its a must in this kind of decks maybe Silent Arbiter aswell... Mizzix's Mastery is a really cool finisher, Mind's Desire Eye of the Storm really fun cards to play in izzet.... Baral, Chief of Compliance Curious Homunculus Â Flip Birgi, God of Storytelling Â Flip Storm-Kiln Artist usefull bears....cheers mate!

Thanks for the suggestions! I had Goblin Electromancer in but cut it to find space for other cards. Do you think itâs better than Curious Homunculus Â Flip?

Shreds of Sanity looks good, Iâll have to find room for it and Voidmage Prodigy .

I think there are a couple simple improvements that could help with this deck. First, I don't see the real use of Jace, Arcane Strategist. It's high CMC and does synergize a lot with the deck. Second, you have only 19 Wizards in the deck including Kaza, and a very surprising amount of creatures are non-wizards. Kaza decks are based a lot on having consistent wizards on board. Definitely removing some of those non-wizards and adding in more wizards is going to help a lot. You certainly have plenty of color fixing in this deck so I think Curious Homunculus Â Flip is an excellent candidate for being removed. Also Vizier of Tumbling Sands is not a wizard but cards like Aphetto Alchemist and Fatestitcher have similar abilities but they're both wizards. I would definitely suggest poking are EDHREC.com for some good ideas on where to go with this deck. You have a good budget start but lots of room for improvement.