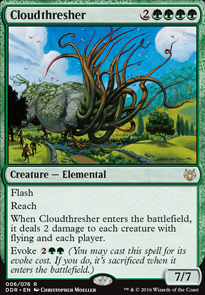 When Cloudthresher enters the battlefield, it deals 2 damage to each creature with flying and each player.

Cloudthresher occurrence in decks from the last year

Throw in some Aspect of Hydra , Llanowar Elves , Elvish Mystic , and Rancor if you can afford it.

The ability of Boomerang to bounce lands doesn't seem very useful in modern when everything so cheap. And it's not like you have anything that really works with bouncing lands. Spellstutter Sprite counters spells with a converted mana cost of 1, might be better than Boomerang . If you really want bounce, I'd say if you're planning to bounce your own things most of the time, consider Call to Heel , and if you plan on bouncing opponent's things consider Echoing Truth . If you can't decide, consider Repeal or Remand .

If you want some spicy tech, run a Redirect or two. In Modern, it can make an opponent Thoughtseize themselves or Lightning Bolt their own critters, steal Ancestral Vision s, and can even counter Cryptic Command s. There are a few decks it does nothing against, but it can often do more damage to the opponent than even Counterspell , when it two-for-one's them. It can also count as removal for you.

Wolfir Avenger 's regeneration makes it resistant to most common removal, and I think it would be an upgrade over Bounding Krasis and Fleetfeather Cockatrice .

Maybe Cloudthresher for the sideboard against Arclight Phoenix and Lingering Souls ? Or main deck doubling as a finisher?

Voidmage Husher is repeatable counter to activated abilities, but is quite mana intensive. Maybe you could find room as a one-of?

People always forget blue and green have burn spells with Psionic Blast and Hornet Sting . It's not much, but it would be enough to catch some players by surprise. It's just a thought, since you said you wanted burn in the deck.

I'm playing Nikya, and my deck list here on tapped out it's not updated. It's Full creatures...62 creatures and 38 lands. I had the same fellings for Primal Surge, and loved your idea on Tarzi. But what i did in my last update on Nikya: Vorinclex, Voice of Hunger and Regal Behemoth to increase your mana at a ridiculous amanounts to Cast ridiculous Hydras...its a F...Gruul so giant creatures are welcome; All Draw creature like Primordial Sage to fuel your hand and use that huge amount of mana; Urabrask the Hidden and all the same way for Haste; Flash creatures to have some surprize..."oh that guy don't use any instant, so lets get him off guard." Cloudthresher , Great Oak Guardian , Haze Frog . The Deck can be awesome cos that "mana flare" on commander is so powerfull, that you going to notice when you have the first game.