Level up (: Put a level counter on this. Level up only as a sorcery.)

Level 8+
Protection from everything
6/6 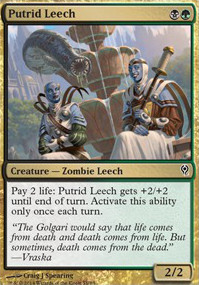 Hey, LucaMassone,thanks for the kind words! Always appreciate the feedback. So here we go:

my favorite two are Hexdrinker and Dragonmaster Outcast

I recommend Lingering Souls over Hexdrinker - you can discard it to Liliana of the Veil and still cast it from the graveyard.

Just curious as to why Hexdrinker sees play. Is it the 2/1 body turn one? Or can rock really drag a game out long enough to max it out?

Yes psionictemplar, paying into Hexdrinker and then untapping to hold up mana for Abrupt Decay and/or Tyrant's Scorn would be part of the plan. Plus I'll be able to pay into Broker to get a card back on opponent's endstep or pay into Torrent Elemental to get it on the board.. And if I make Creeping Tar Pit a creature for unblockable damage, it will untap at endstep cuz its still a land, leaving me with more mana and a possible body for blocking. Then there's the cost for Magewright's Stone that I can activate targeting Broker to activate her again. If Nadir Kraken is on board I'll also have mana to pay into it after tapping Broker to draw. I guess when it comes down to it I wanna be doing stuff on my turn and opponent's turn and constantly getting tidbits of value that will hopefully pay off as the game goes on. I feel the only way to get Bane Alley Broker to work is to always have mana ready to spend.

seshiro_of_the_orochi the fact that a new Seshiro would fit the criteria outlined so specifically makes me think that you could very well be right in making that prediction. Clever thinking bro.

Flooremoji that is an interesting prospect, yet I firmly believe that there's almost no way we only see two basic land types in M21. I think it's far more likely that we see a pair of cards that simply both happen to fit this criteria independently, in what will almost definitely be mere coincidence. Don't know if that was meant as a complete joke, though. Also, couldn't Hexdrinker almost be considered a french vanilla mythic? Idk, I'm not expecting much more than an aggressively costed can of keyword soup.

Hey Reznorboy! Fair question. I have a few thoughts:

I think if you want to jump into Modern, a deck like this can be pretty difficult to pilot. It requires a strong grasp of the current meta, and it is frustrating to play early on :)

As for budget options, I want to be clear that any suggestions I make will make winning games, harder.

That being said, lets start with the lands, they are the easiest.

You can even use Rootbound Crag, Sulfur Falls, Hinterland Harbor

Either way, you will have to run more basics than what I have here.

As for FoN, I used to play this deck with Disrupting Shoal. And if that isn't your cup of tea, then just use Deprive

Lastly, I hesitate to suggest any replacement for Tarmogoyf. but if he is just too out of range, then have a look at Hexdrinker, or Sprite Dragon

You'll probably want to add more lands than 17 if you plan on playing those two as you need more mana early on to sink into them. Hope this helps!