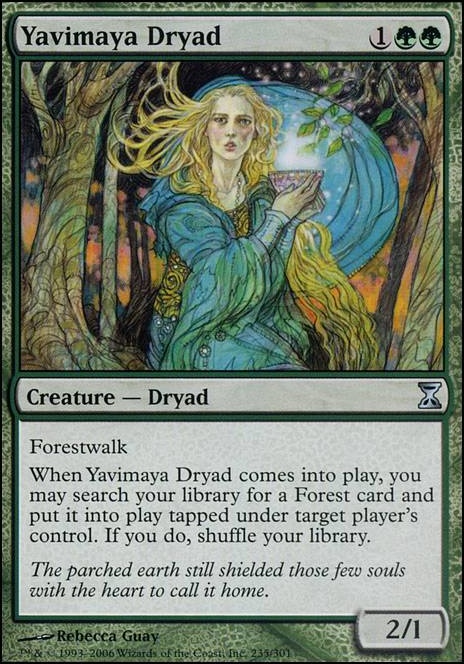 When Yavimaya Dryad enters the battlefield, you may search your library for a Forest card and put it into play tapped under target player's control. If you do, shuffle your library.

Yavimaya Dryad occurrence in decks from the last year

Yarok, the desecrated
by Auzzboy

Can You Smell What Yarok Is Cooking
by -Fulcrum

OH man, Forbidden Orchard for the win! Definitely I'd say no worries about using tapped lands, I usually wont when I"m just trying to test the engines. I can always get a good idea in game if the deck will be worth the earlier turns from a better mana base.. but really, in 4-5 player casual games, I think the faster we are the more likely we are to lose our momentum because we become the threat and are wiped/targeted.

I didn't include Yavimaya Dryad because of the 2 pips for ramp in a 3 colour that's not built around lands and ramp, but I think you're right - the forest walk actually puts it in the to tier category for value cards in here. I'd be fine with being slower if I'm more likely to trigger Marisi when it's time, and with all the decks with green so people can search for basic and fix, it has a decent chance of getting through. And with the tool box lands - I think you made the point needed where green can get its colours, so those lands mentioned become fantastic. I love using rogue's passage on other people's creatures.

On that topic, my favourite card in Kresh is Berserk.... :D.. Another fun removal that adds to the manipulative chaos here. oh man! It's a pricey one though as well.

Sweet man, that's great the deck will get rolling! Building it primarily online really changes the nature of how it feels, I've found my decks lose the feeling of being alive, especially when I goldfish them to inform the build... They end up being more like machines then ecologies that are more dynamic to play. Hard to explain. I can't wait to see this deck rolling, though! I love that it adds a new puzzle to the gameplay for the whole board, changing things up kinda little kinda like Planechase.

goldlion I agree with all of this!

Good thoughts on Eesha, I'll make sure to test her out at some point! Quick question, you mentioned her blocking anything but trample, but as far as I know, trample can't go through protection, since it never deals damage and thus can't have any excess damage for the player, right? Just curious on this ruling, I know indestructible doesn't completely stop trample, but I figured protection from creatures would.

I'm not sure how I missed Farhaven and Wood elves, I usually like to use them in green. They would be a good fit here, so I'll grab them when I get a chance. Also, perhaps the little known Yavimaya Dryad which has more synergy with the deck, being essentially a Wood Elves with evasion, but is a little harder to cast with a 3-color mana base.

I like your suggestion of Rogue's Passage, and I think its versatility could be high in this deck, since it can be aimed at an opponent's creature as well as our own. For a similar reason, I think Kessig Wolf Run and Sunhome, Fortress of the Legion could be good too. (Kessig Wolf Run is underplayed in EDH in my opinion, I think most RG decks should be including it, it's so useful.) Don't want to have too much colorless in this 3-colored deck, though at least it's greem so finding all the colors shouldn't be too hard.

I actually got a little hasty a few days ago and ordered enough cards to get the deck together in at least a playable state, so I'll get some chances to play it and figure out what works and what doesn't before I start making revisions again. Unfortunately that means I missed out on a lot of awesome cards presented in the last couple days. Don't hesitate to keep giving suggestions though, I'm enjoying what you have to say!

I probably should have put more of my budget into the manabase, but eh, I'll just have to make do with guildgates and stuff for a while. I'd ideally like untapped mana consistently on the first few turns to ensure my evasive stuff hits early, but in time I can start adding things like Shock lands, Crowd lands, Grove of the Burnwillows and the hilariously on-theme Forbidden Orchard. For now, a slightly slower start will be fine, though I am playing the three Fast lands in my colors.

I have a Tatyova deck built around her as the engine, and what I've found is most important is the curve. I built her as druid tribal, so there are plenty of Llanowar Elves variants, and I restricted the ramp to mostly 1 and 3-mana spells, so I could get her out by turn 3 most of the time. Since a body is a body in your deck, and combination of T1 Birds of Paradise , Llanowar Elves , Elvish Mystic , Fyndhorn Elves , Joraga Treespeaker , or Boreal Druid followed by T2 Wood Elves , Yavimaya Dryad , Farhaven Elf , or Springbloom Druid is a good start.

Palinchron goes infinite with Yarok, so I'd recommend that.

I think Villainous Wealth is just a bad card. I think there a better things to be doing with infinite mana. Without infinite mana it's just not strong enough unless X = 15 or something. And in that case I would rather play Torment of Hailfire .

Vivien, Champion of the Wilds gives creatures flash, but that's already granted by Leyline of Anticipation and Alchemist's Refuge . I don't think you need a 3rd redundant effect like this. Vivien is also much more vulnerable than these two other cards.

Force of Negation can be replaced with Swan Song and I think it would just be better. Force of Negation is a strong card, but I don't think you need to be concerned with it unless your deck is angled towards having 1) tons of blue cards and 2) wants to counter many things.