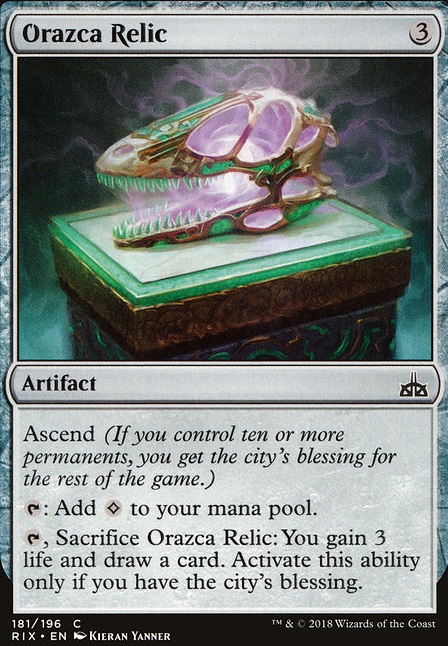 T, Sacrifice Orazca Relic: You gain 3 life and draw a card. Activate this ability only if you have the city's blessing.

Slagwurm Armor and Echo Circlet don't help you do MORE P U N C H, and therefore I think are unworthy of your handsome deck.

Orazca Relic is another worse mind stone, but mind stone is so good that you probably want the bad versions too. And Spare Supplies is GASP almost as good as Divination.

Staunch Throneguard is pretty risky, but I also don't know that you can turn down any form of repeatable card draw.

Bone Flute is pretty bad, but it's called bone flute, so you gotta give it some points for that.

griffstick- I do like the idea of Blight Sickle. I'll see what I can cut. I'll have to think about Seer's Lantern. As I'm mono-white I can't scoff at any card selection but its also a 3 cmc rock that I can pay 2 to scry which feels super bad.

SirQuixano- Thank you for the many suggestions. Pacifism is a strong maybe, I don't like the idea of only getting rid of an attacker/blocker. A lot of the time I want to get rid of a creature because of a passive or activated ability. But getting rid of an annoying blocker is also something this deck wants to do.

I am good on ramp for the most part. I already have Mind Stone and Everflowing Chalice is too slow. Most of the time I would play it with 1 counter because next turn I want to play Danitha Capashen, Paragon and the turn after play and equip many equipments, and there Arcane Signet is just better. The only rocks I have are ones that I can cash in for a card later in the game when I don't need the mana. Orazca Relic, Bonder's Ornament, and Magnifying Glass are therefor viable but their draw is all very expensive. I think ill add Bonder's Ornament because it is a repeated draw and also creates colored mana. Magnifying Glass is 6 mana to draw a card and only creates colorless mana. Orazca Relic is interesting but is cmc 3 and is only 1 time draw with cities blessing and only creates colorless mana.

As for the fetches, first off, things like Evolving Wilds and Terramorphic Expanse would be better but I also really dont want the slow mana. I had Scaretiller in at one point but by the time I had cast it and it started to ramp me I did not need the ramp anymore. Radiant Fountain is probably not necessary because my commander has liflink so my life total is not much of a problem. I was considering Quicksand while building the deck and am on the fence about it.