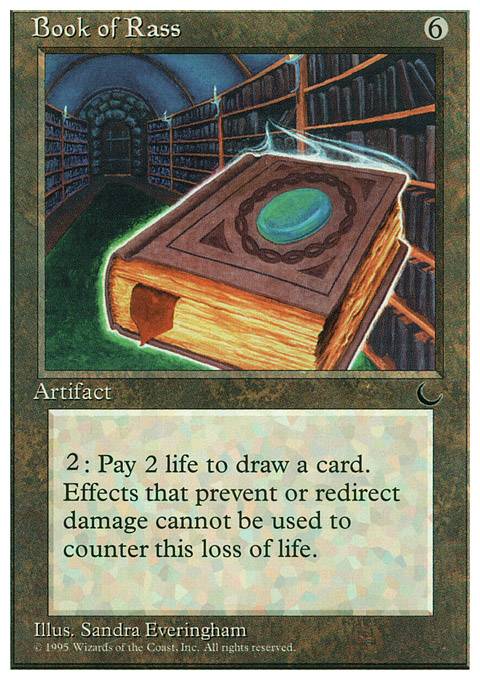 SynergyBuild on Will There be a Commander â¦

DemonDragonJ Ngl I felt Eye of Vecna was a reference to Book of Rass from the newest set, but that may mean we will never see it reprinted.

DemonDragonJ on Will There be a Commander â¦

legendofa, some reprints that I very much would like to see in such a set are Imperial Seal , Book of Rass , Rhystic Study , Smothering Tithe , The Immortal Sun , and Dockside Extortionist , because all of those cards are very expensive (except for the book, which I wish to see reprinted simply so that it shall be in the new border style with new artwork.

Mcat1999, in that case, why not print a card that is functional reprint of Book of Rass , but with a name that does not mention anything specific, as Elvish Mystic is to Llanowar Elves ?

Azielle, if WotC reprints Personal Tutor or Imperial Seal in a Secret Lair product, rather than a Commander or Masters product, which would make much more sense, it will be blatantly obvious that they are simply attempting to get money from the customers, rather than actually attempting to make cards more affordable, so I imagine that the players will not be pleased about that.

Mcat1999, Caerwyn, Book of Rass is a colorless version of Greed , so it can fit into any deck; what is there to not like about that?

DemonDragonJ - It does not help that Book of Rass has never been all that popular of a card--it has low ratings on the Gatherer with a low number of votes, indicating it was not fondly received when it initially came out. It shows up in 0% of decks on EDHRec.

It also has the added burden of being attached to the proper noun "Rass". Thus, you cannot print it in any set that doesn't also reference whomever or whatever "Rass" is.

Caerwyn, that does make sense, as much as I dislike it.

In the case of Imperial Seal , I can begrudgingly understand, but what about Book of Rass ? It has no significant monetary value, and, if WotC has reprinted Greed several times, why not reprint the artifact version of it, as well?