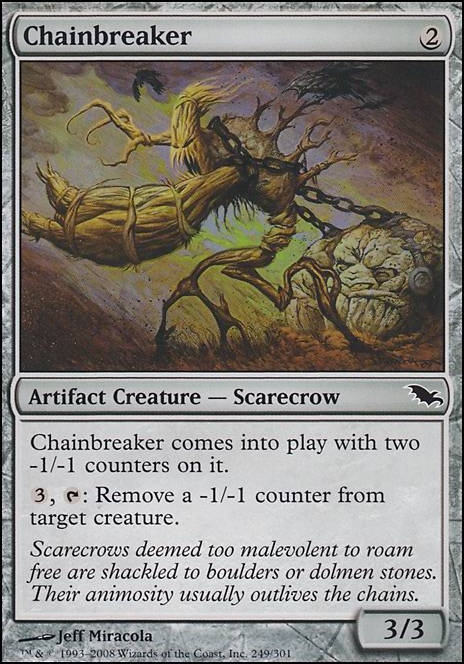 Chainbreaker enters the battlefield with two -1/-1 counters on it.

The Reaping Plague
by SOTC 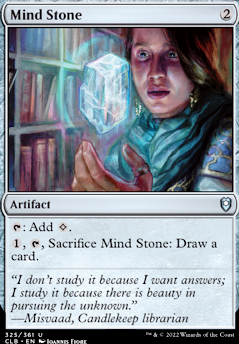 joshuaschurer if youâre just looking to bring back Scarecrone with Persist, then iâd recommend playing Unearth instead - itâs a mana cheaper, doesnât weaken your creature, and can be cycled if itâs not needed.

I still donât think Chainbreaker is worth it from a protection angle. Your deck wants to be killing stuff to profit from Necroskitter and the likes. And its ability is just soo slow. I would suggest running a more aggressive card than this one (i still think Necroskitter will help you out a LOT in the early game)

Cauldron of Souls (Same as above on no Hapatra interaction, and most of your board presence will be snakes that cannot take advantage of the return. This one is definitely ok to keep, I just didn't like my results.)

Serrated Arrows, Trigon of Corruption (repeatable counters, but One a turn max, Arrows run out quickly, and Trigon takes investment to use and charge. Fevered Convulsions, while more expensive, is not so limited)

Quillspike (A lot better than Chainbreaker, does more with the counter removal. Cut it last)

I also see you swapped Zulaport Cutthroat for Blood Artist. Change that back :) While its true the Artist work on Any creature death, the Cutthroat hits all opponents for each of yours. He'll pull ahead with all your snakes.

Take out Chainbreaker, Harvest Hand  Flip, and you could take out alk xolor spexific xards.

I've never tried to build Mikaeus myself, but from what I know about combo decks there are three categories of pieces that make the deck work: 1) Creatures that can re-undie with Mike's ability; 2) Sac outlets to feed them to; and 3) Death triggers that can create a win condition.

From the looks of this deck, what you tried to do was to load up on as many of each these as you could to get the best chance of drawing into the ones you need. Here's what you have of each category:

So, all in all, 29 of your deckslots are focused on nothing except your main win condition. That's a lot of bloat for a deck that needs to ramp at least to 6, and should be packing disruption aimed at its opponents on top of that. Considering you're in the color with the best unconditional tutoring, I think you can get away with cutting a lot of those redundant combo pieces, and right now the first category is what you have the most of. I'd say anything that doesn't reduce the need for additional pieces or generate infinite mana is worth cutting.

I'd cut all of the following:

For more tutors, draw, and ramp. (That would also lower your curve to where Ad Nauseam is viable.) Leave Banewhip Punisher, Chainbreaker, and Spincrusher since they're the cheapest, and Banewhip Punisher is semi-decent removal.

I also recommend Skullclamp in terms of draw, as it goes very well with the reccruing creatures and sac outlets. You could also consider a bit of a reanimator strategy to get your combo pieces, since black can tutor to the graveyard.

I play a Mikaeus-deck myself and I really like your work. But I think your mana-curve is not really that optimal. I play many ramp cards and only combo-pieces, which allows to make a turn 4 or turn 5 kill, nearly every time. Please also be aware, that Mikaeus gives all your creatures +1/+1, so things like Mindless Automaton don't work, even if you kill them manually, it's stuck with only one +1-counter. If you want to make your deck more consistent and more deadly, take out all cards that don't kill your opponents IMMEDIATELY with Mikaeus. Cards like: Abhorrent Overlord or Dusk Urchins all need preparation time, so think about cutting them. Also cards like Liliana of the Veil don't do anything for your combo in this deck and are better off in a good modern deck (Oh, I wish I had one myself :( ). Here are some cards that I highly recommend to you, in order to combo off faster, and better:

Fume Spitter (I love him but only in my starting hand)

Infernal Darkness (maybe, but always worth it)

Pentavus (The only 7-drop allowed in this deck)

Grinding Station (you have many artifact creatures then...)

Some nice ways to tutor are:Dimir Machinations and Shred Memory. They get you all the combo pieces.

You may ask: "And what shall I cut?"Every Planeswalker, they do nothing for you in this deck. Every damn card that costs 5 mana or more (Only Exceptions are Pentavus and Triskelion) . (Yes, you can also cut Sidisi, Undead Vizier, if you have enough tutors). And everything, that doesn't combo with Mikaeus in a way that doesn't kill all your opponents immediately. Your goal is to win the game as soon as Mikaeus hits the battlefield. Most of the time the disruption can't do anything, because you can combo off in response to that. And to make it as fast as possible, add all mana artifacts known to mankind to your deck. Thran Dynamo, Jet Medallion and so on, and so on. You don't need any removal or any Temporal Extortion or Imp's Mischief and stuff like that. Aim for a turn 4 kill and cut everything that doesn't support your idea. There will be no threats on turn 4 or five that need you to have any special removal.

Hope this helps out.

If you want, I can post a link to my Mikaeus deck. I don't like to do advertisement for my decks, so I do it, if you want to see my idea of a perfect deck.