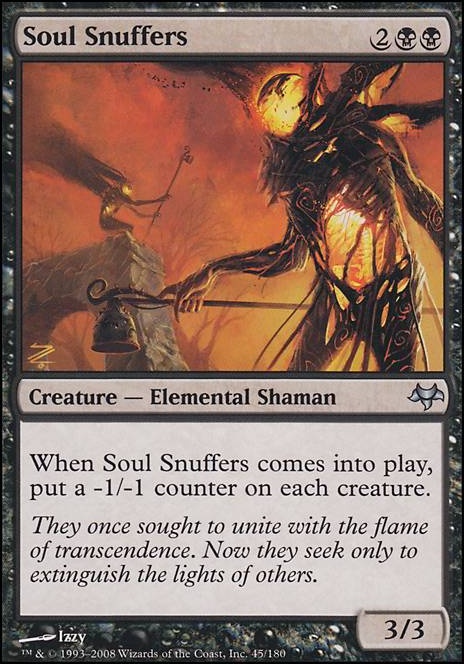 When Soul Snuffers enters the battlefield, put a -1/-1 counter on each creature.

Soul Snuffers occurrence in decks from the last year

IzmAYAYA: If you cast a removal spell on Yawgmoth, yes, I can still try to combo with him in response. I've won in response to removal before. However, it means I have to win without sorcery speed cards, which is possible but harder (usually involving some janky combination of Vampiric Tutor, Chord of Calling, Noxious Revival, Crop Rotation, etc). Once I have something like Ivy Lane Denizen on battlefield, though, my Yawgmoth combos become almost impervious to removal (since I can just start a second iteration of the combo in response to your removal). I hope that answers your question! (Also, I can dig and try to find Veil of Summer and/or Heroic Intervention to counteract your removal.)

cleandeceit: Mikaeus wasn't doing enough. He got a lot less good when I removed Defense of the Heart. I am not a fan of Grismold here at all, sorry. He makes it impossible for Hapatra to connect, gives opponents things to sacrifice, et cetera. This isn't 100% a Yawgmoth combo deck; I do still use aggro as my backup plan, or to win with things like Craterhoof Behemoth. Moreover, the many snakes from Soul Snuffers increases the power of Gaea's Cradle, Ohran Frostfang, Skullclamp, Earthcraft, et cetera. Grismold does this job much less effectively, and generally fits my gameplan less well: I'd prefer the one huge "burst" of creatures. OptimalGreen is completely correct -- if I orient my whole deck towards Yawgmoth, I'm dead in the water if he gets exiled, etc.

@OptimalGreen, One death touch snake from an early Hapatra swing works well enough for detouring attacks. What deck is bringing a group of attackers against this combo heavy deck? More likely the enemy of this deck is also trying to combo, so ten blockers is not what you need. Besides, what's the point of "buying time" really? It just means you didn't get to your win fast enough. Grismold could bring you that win faster thus eliminating the need for more time. Also, Grismold makes two bodies the turn you play him, so he works fine for buying time in the early turns with the added benefit of not killing your own utility creatures the way Soul Snuffers does.

Consider this, two mana Hapata, 3 mana Grismold, 4 mana Yawgmoth. Grismold would balance the cost of the -1 counter placement with each token you sacrifice to Yawgmoth. This allows you to dig as deep into the deck as you need to immediately. Yawgmoth and Hapatra alone give you the lock on creatures, but if the field is clear and you haven't drawn enough cards to find the win, passing the turn gives too much time to your enemies to kill Yawgmoth. If you can get something on the table before you drop Yawgmoth to help you go deep straight away, you remove that window from your opponents. Spidersilk Armor does the same thing for you. It's important that the card you select for this purpose cost less mana than Yawgmoth so that you can get it on the table first.

My argument against Soul Snuffers is that in the best case scenario, it nets you some 1/1s while knocking out some enemy 1/1s. Even if it kills 4 mana dorks and brings you an army of 10 snakes, it doesn't really bring you any closer to winning the game. AND its 4 cmc. Better to have a 3 drop that can work into a combo loop.

@ king-saproling Thanks for the suggestions, all solid recs! I used to run Soul Snuffers and Midnight Banshee in this deck, I pulled them out a while ago but I do miss them. I hadn't seen Canker Abomination, that rulesssssss. And yeah, Cauldron of Souls in this deck...mamma mia, that's a spicy meatball

Nice list! I really appreciate the sentiment that mtg is for everyone. Personally I'm hoping we get some reprints for many of the $20+ cards out there.

Zakuzelo... Early game is all about getting token engine built and stalling the opponent. When it is time, generally I attack with Ammit Eternal and snake tokens (leaving a few defenders), both of which typically get through due to Afflict and Deathtouch... all while having tokens generating and getting Poison-Tip Archer into play. Once this board state is achieved, I play either Black Sun's Zenith or Soul Snuffers to place counters, kill 1/1s and generate more tokens, then deal direct damage (via Poison-Tip Archer) to player. At this point, I can usually swing board the following turn and win. I may move Blowfly Infestation back onto mainboard, as the combo for infinite tokens really makes this a more cheeky, but threatening build. As has always been the case, this build is either full-on, on-curve assault, or is frustratingly slow and non-effective. There doesn't seem to be much in-between. Normally it is fairly effective, and I am guessing I win about 50% of the time overall, give or take.