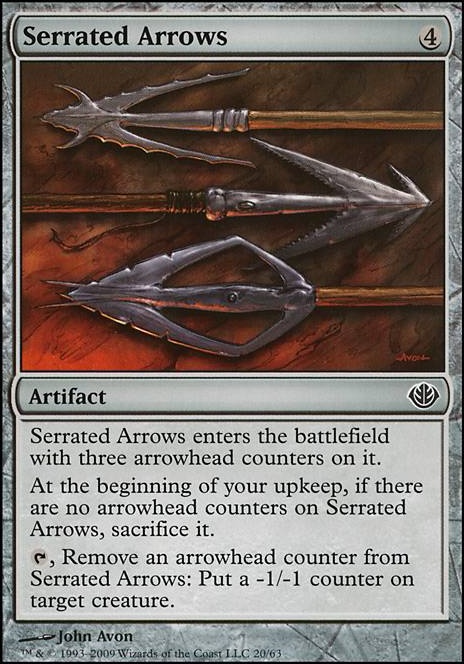 Serrated Arrows enters the battlefield with three arrowhead counters on it.

At the beginning of your upkeep, if there are no arrowhead counters on Serrated Arrows, sacrifice it.

, Remove an arrowhead counter from Serrated Arrows: Put a -1/-1 counter on target creature.

Halo Fountain: Heh, by proxy? Anyway, two mana to draw one card per turn isn't super efficient, but beggars can't be choosers, and the versatility of being able to make a token or even win the game makes it a pretty good package. If you can get trough the color weight of the activated abilities, I can see this being interesting in boros with red's cheap "temporary tokens", e.g. Elemental Mastery

Urabrask: Prosper is trying hard not to laugh. 5 mana is a bit steep too

Ob: Finally rakdos eh? Though self-copying seems a bit weird. Without the Demon tribal part, it could have easily been a Tibalt card.

Cut of the Profits: Yeah this art is pretty sick. I have a soft spot for black cards flavored around gold

Vivien: Feels like kind of a black card with all the stuff that's going into your graveyard but okay

Rumor Gatherer: So why isn't this a Druid? Is the flavor that she's shrunk the big pets?? So weird

An Offer You Can't Refuse: New EDH staple. Two treasures is worth it to stop that key hose/bomb.

Courier's Briefcase: Hm, wonder if there'll be a cycle of rainbow mana cards? Although I can see the reasoning of mono-green being able to produce other colors on its own. Get four of these and you can use the Treasure mana from three of them to generate 60% of the colors needed to draw three from the remaining one, yay...

Kitt Kanto: How is a "Mayhem Diva" at all white? Anyway, IDK if I can make room for this in my Marisi deck, pretty expensive and kind of in tension since untapped creatures could have probably just attacked instead

Anhelo: He's clever enough to not have enough power to be casualty-fuel himself

Kamiz: Yeah I have a hard time getting a sense of direction for this. Voltron with a bit more medium-big creatures?

Perrie: Permanents, not creatures. Dig trough your collection for weirdos like Coral Reef and Serrated Arrows

Sorry for taking some time to answer.

I'm kinda used to TappedOut and even paid to be an upgraded user. It's a bit outdated compared to some newer sites but I'm quite fond of it.

I remember you saying in one episode that you thought Serrated Arrows saw some competitive play. In case you want to tell these curiosities to the audience, you can click on the card, scroll down then click on "search [card name] in mtgTop8" and it'll show you every deck that topped an event with that card. This isn't that useful but it can be fun to show, sometimes, a card that looks bad but actually saw some play.

If you want, I have some custom tokens made. I know right now you guys haven't been using a lot of tokens but if you think it could spice things up for the audience just tell me and I'll see if I already have one made. The only problem now is I don't have a computer, so I can't make new tokens, which means I can't make Rukh token :(((((

I almost want to recommend Leviathan even though it is just so trash...nice deck name. Thoughts on something like Serrated Arrows. Could really hit the nail on the head with options like Basalt Monolith, Crystal Rod, Null Rod, Rod of Absorption, Detection Tower, or Phyrexian Tower.

Other random thoughts: Thoughtcast and Thought Monitor are good with your artifacts. Tainted Strike can give you a surprise win. Rogue's Passage lets you sneak damage through. Serrated Arrows is great with proliferate. Triumph of the Hordes is pricey, but a good finisher. Black Sun's Zenith is a great, versatile board wipe, and with proliferate X=1 means your creatures survive while you proliferate theirs out of existence.

What about Serrated Arrows and Trigon of Corruption?

So i made a custom set as for some friends a long while back it features 3 main factions all Share one color which is Red there are the Paladins which have been at war with the Occult Knights for Centuries. And the Rangers which have trying to keep the damage to both nature and people to minimum. They each have there own Unique mechanic with their leaders have different unique mechanic (minus the rangers). These was some of my first cards I ever made so they bound to unbalanced, broken or just plain bad

The Occult Knights mechanic is Dark Power which is was based off of threshold but it goes off if you 4 black cads in your graveyard.

And the Rangers mechanic is Full Quiver which always you to discard a card in search for an artifact with the sub type Arrow making sort of a toolbox build before i knew that existed. Funny enough this was based off of comics like the Green Arrow and others that always seemed to have the right arrow for the right situation even if was a completely wacky and bs thing to pull out of a quiver. with this subtyping the three artifact arrows already made would be retrofitted with the arrow subtype as well so they could be search for if you wish they are Infused Arrows, Serrated Arrows and Pathway Arrows

The Elder Cultist are the sub faction within the Occult Knights and they are and they focus and channeling dark forces from an unknown plane to empower the Knights so that they may conquer the plane they break conventional thoughts and many think they may not even exist within the fabric of this reality as such they mechanic is Mind Break which I'll just let you read.