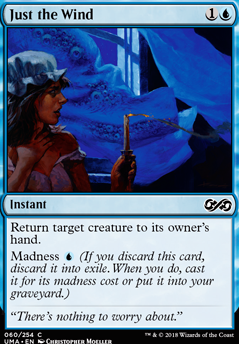 Madness (If you discard this card, you may cast this for the madness cost instead of putting this into your graveyard.)

I like your substitute for Intuition. Very nice. Personally, I would cut one Careful Study since you aren't playing Uro, Titan of Nature's Wrath, and in it's place I'd play an additional Just the Wind or a Savage Swipe for removal.

Your sideboard is going to need a way to deal with other decks that toolbox the graveyard. If you cannot afford Echo of Eons I would recommend just playing a few copies of Tormod's Crypt. The burn matchup can be tough without Uro. For this reason, I recommend you also side two copies of Golgari Brownscale as well.

So with the new set coming out thereâs more ninjas so theyâre an obvious include- hereâs my two cents on switches..

Take out Wharf Infiltrator for Ingenious Infiltrator . Easy upgrade, Wharf really doesnât provide that much as a 2 mana 1/1, thereâs plenty of decks that run 1/1 mana dorks etc that can become easy chump blockers since theyâd rather block then take the damage from a ninjutsu hit. Plus the ninja has infiltrator in the name still so flavour win yay! Finally, the card draw is AMAZING. Go wide with creatures that much faster.

I would switch Thada Adel, Acquisitor for Fallen Shinobi . Again they do similar things, however Iâd rather get a free cast from an opponent and get the ninja triggered abilities over her. A 3 mana 2/2 isnât so great either, even though I understand islandwalk, if the opponents donât run blue, itâs just essentially a wasted slot or a chump blocker - which isnât true to the deck.

Notion Thief I would definitely substitute for Changeling Outcast . I think the text you have to pay attention to is that it says you draw the extra card in their DRAW STEPS. Outside of that, like main phases, you donât get that draw - so itâs way too situational and really doesnât shut much down at all... unfortunately another wasted slot. The Changeling however, is a 1 mana 1/1 unblockable that is also considered a ninja!! Woohoo ninja paradise!

Nightveil Sprite out, Pteramander in. A 1 drop is better than the 2 drop. Nightveil gives you surveil, but youâll be ninjaâing out most of the time anyway so thatâs just an extra mana to drop the creature on the field, you basically graveyard a card if you donât want it (and when you attack with ninjas youâre blindly going in to the next card anyway), and then spending an extra mana to do it him back on the battlefield. So in that process you couldâve saved a card from hitting the grave and saved 2 mana if you had of used Pteramander. Itâs in your sideboard, id definitely use it.

Etrata, the Silencer out Windfall in. You have it in sideboard, itâs amazing. Not only will you refill your hand most likely in multiplayer games, always live by the rule that your opponents current hands are better than the ones they will get. They have plans for those hands, they may have tutored combo pieces, you just got rid of that and filled your hand to throw more creatures out. DEFINITELY use this card. If youâre sceptical why Etrata, yes the first half of her text sounds amazing that you exile a creature when you do combat damage with her and if you do 3 they lose. But you shuffle her into your library after you deal combat damage. It is super inefficient unfortunately, and you just spent 4 mana on a exile a creature card when thereâs way better card disruption out there, or you could have spent the 3 to cast Windfall and maybe drawn into a wincon or lots more creatures?

Iâd also switch Crystal Ball for Naga Ninja. I understand how useful scrying can be in Yuriko, but I also believe this guy outplays the card by far. Instead of scrying 2 each time (wouldâve cost 4 to do the first one), you could have paid 3 mana to ninjutsu naga boi out, and created a copy of him, two ninjas for 3 mana over scry 2 for 4?! Next turn you would have scry 4 for 5 mana in total, whilst hypothetically you could have dealt damage with 2 more ninjas and created 2 more copies. I think you get where Iâm going with this... the value is so insane in comparison.

This is just my opinion and what I would recommend, more ninjas for less mana, go wide! By the way if you find board wipes are getting to be bad news, id look at switching out Evacuation and Just the Wind for more counters. Some of my favourites are Arcane Denial for an extra card (even if the opponent gets 2), Muddle the Mixture - Transmute is just extra gravy, and Spell Pierce the classic. There is better ones, but these are just budget ideas I thought may assist. Also I mentioned evacuation, because even though it is a nice card, I feel better having more protection for my board over returning all creatures In response to my creatures dying - but thatâs just my preference!

Anyway I hope you enjoy reading my thoughts on it, lemme know what you think!

Yahenni's Expertise kills Baral, Chief of Compliance so something like Rags // Riches could be better. also the only zombies you have come from Rise from the Tides and the only discard you have comes from Baral, Chief of Compliance which means that most of the time Just the Wind and Compelling Deterrence will just be 2 mana Unsummon. maybe a playset of Blink of an Eye would work better?

So I modified your list a bit, but I don't know if you want to see it. I'll offer some suggestions and leave a list at the bottom if you're interested in what it could look like.

PS. Let me know if you have any sideboard questions.

dont even try me

Spell Pierce, Mana Leak and Rune Snag are generally good, pretty cheap counterspells you could use.

I would recommend replacing Aberrant Researcher  Flip with Delver of Secrets if you don't mind the jump in price. Otherwise, you might want to just drop it as its cost is a little high for its impact.

You might want to drop Baral's Expertise as you rarely want to cast a card with it at sorcery speed and without that benefit, it isn't very good.

Going down a couple Rise from the Tides wouldn't hurt as you don't really need to cast it multiple times and drawing it early is just a dead card.

Scourge of Fleets is similar, so you might want to drop it entirely or go down to one.

I also recommend dropping Turn Aside, Supplant Form and Just the Wind.

Adding more Thing in the Ice  Flip would be good if you have some.

You want to drop down to 24 or so islands.

This should get you to around 60 cards.

Yeah i see your point. Its just that you need time to set up your alignment and against aggro (mainly zombies) i am not sure if you can hold long enough till you are rdy without more removal. I mean... You are black after all :-) and as much as i like drake heaven i am not sure for it as a viable alternative finisher here... But hey, let us know how it works out!

Btw saffronolive did an against the odds on it, its a little outdated, but maybe you find some ideas

If you want to stay blue and keep the engulfs, maybee use stuff like Just the Wind or Baral's Expertise or even Unsummon

Dynavolt Tower would be good here for some energy income/control. Seer of the Last Tomorrow works too, plus there's a few blue madness cards like Just the Wind/Broken Concentration/Welcome to the Fold/Compelling Deterrence to make the discard less painful.