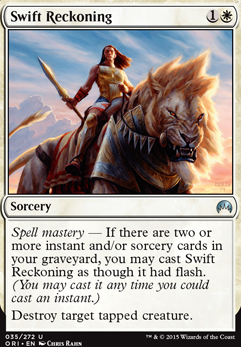 Spell mastery â If there are two or more instant and/or sorcery cards in your graveyard, you may cast Swift Reckoning as though it had flash. (You may cast it at any time you could cast an instant.)

Holy of holies
by Vash98 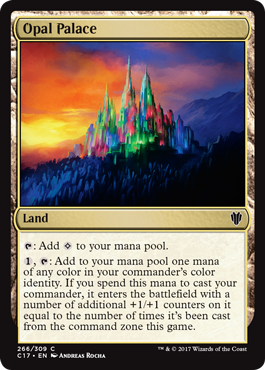 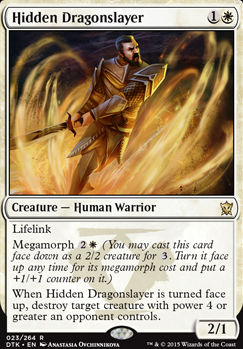 The Holy Clap Back (update v1.3)
by kindsith

Do you like Swift Reckoning better than Seal Away , or is the fact that it gets hit by Naturalize not worth it? I have heard varying opinions.

Then, why not Raise the Alarm instead of Sworn Companions, Call the Conclave and Advent of the Wurm? It's an instant and it costs less or puts more tokens

Other good token spawners, if you want to go that way, could be: Secure the Wastes, Brimaz, King of Oreskos, Timely Reinforcements, Gather the Townsfolk, Beckon Apparition, Gideon, Ally of Zendikar. Things that help token are Intangible Virtue, Anointed Procession or Parallel Lives

If it's on budget I'd recomend Path to Exile, one of the best white creature removal, instead of Luminous Bonds and Swift Reckoning (I'd use at least 3x)

Alternatives to Dawn of Hope are Mentor of the Meek and Oketra's Monument (which, personally, I don't like so much)

If it's on budget I'd also suggest Voice of Resurgence

36 lands is as low as I'd want to go here. So if I were going to cut 5 cards, they might include the following.

Cached Defenses/Dromoka's Gift - I don't like the cards that only Bolster, since you can't pick your target and they only affect one creature.

Sandsteppe Mastodon - Very powerful, but as a one time ability on a high costing card I'm not a fan.

Dromoka Captain - I feel like this will take too many attacks before it starts generating real value, and on its first attack is so easy to block and kill.

There are some other cards I'd consider making swaps for too, but I think these are less important than upping our lands first. But some choices:

Naga Vitalist/Druid of the Cowl/Honored Hierarch - These could be Rampant Growth, Kodama's Reach, or Cultivate. Things that put lands into play are usually better in Commander, since board wipes are so common. The Rishkar, Peema Renegade mentioned earlier would be the only creature I would really consider here, but thats just me.

Celestial Flare/Swift Reckoning - Looking at removal, Blessed Alliance has a little more flexibility. Beast Within is a little costly, but its one of the best things green can run since it hits everything. Sylvan Reclamation fixes land, or gets rid of two problem artifacts or enchantments, very useful! Ainok Survivalist is another possible option, again b/c you don't have many things to deal with artifacts or enchantments. Caustic Caterpillar is worth a look too.

If you already have the cards in your list, then try them out before swapping over this is all just general thoughts since I haven't played the deck. Adding those lands is really my #1 desire.

BlueScope on Deathtouch from beyond the grave

What Epochalyptik describes seems to be the key point for me as well, as the fact that abilities exist on the stack independent from their sources seems to be clear to the questioner here.

The concept of last known information is a different matter, though, which basically means that if a source would do something and has changed zones since it's activation, the exact qualities that object had when it was in that zone are used to determine the result of the ability (for a different explanation, refer to 112.7a quoted above).
This means that if the Pyromancer is destroyed, whether it's ability deals Deathtouch is based on whether it had Deathtouch when it changed zones. Therefore, A and B are very much synonymous in this case.

The way question C is phrased, it depends which creature they were talking about - Archetype of Finality's ability indeed only works as long as that creature is on the battlefield, so if you were to Swift Reckoning the Archetype (assuming it was also tapped), by the time the Pyromancer's ability resolves, it will not have Deathtouch anymore.

Lurac on Deathtouch from beyond the grave

Assume that my opponent has a pinger in play, like, say, Prodigal Pyromancer. He gives the pinger deathtouch, e.g. with Touch of Moonglove, and I have a conditional instant removal, say Swift Reckoning in hand.

I cast my removal in response when he tries to ping my creature. in this case, the pyromancer will die before the ping hits. My questions:

A) Does the Deathtouch from ToM still affect the ping, even as the pinger is no longer in play

B) Would it be the same case if the pinger had deathtouch printed on it?

C) What if the deathtouch was granted by a continuous effect, like Basilisk Collar or Archetype of Finality? As far as I can understand, that effect is bound to stop when the creature leaves play.

Sweet list overall, a few suggestion I would give are as follows:

I do really like the miracles slant you have given to this deck and I'm excited to see how it evolves in the future.