Whenever one or more creatures attack you, you gain 1 life for each attacking creature.

A new day, a new hippo!
by Serom 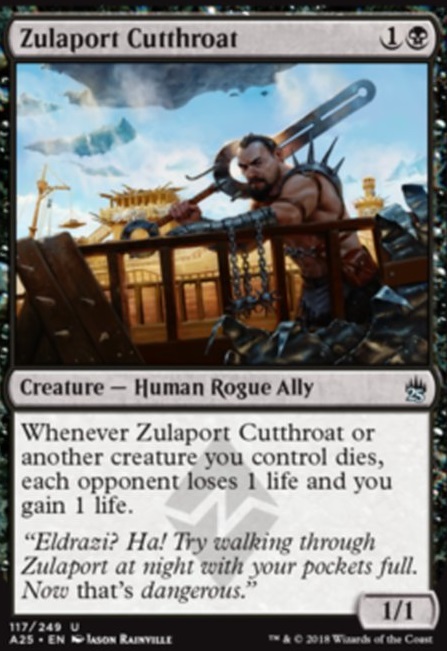 Sigil of Valor for when you do attack alone.
Maybe Blade of Selves, that would work around cards like Dueling Grounds but it wouldn't synergize with your commander or any exalted effects.

Also, if you really want to break the game, look for any cards with the "Banding" mechanic.

Noble Hierarch might be worth looking at if you start to feel like dropping knights tribe and going for human tribe. (although I know knight synergy is really fun).

Thanks for all the good suggestions Scorprix I've changed what I wanted the deck to do but still most of your suggestions will be added.

Firstly Tainted Remedy is a meta call one of my friends plays GW lifegain, I agree with Underworld Connections which may be replaced with Necropotence or a similar CMC draw engine.

Orim's Prayer, Hissing Miasma, and Cliffhaven Vampire all cut, you're right they're too weak. Herald of Anguish was cut as well I was just thinking of some sort of hand disruption but you're right it's slow.

Serra Ascendant is one of my favorite white cards so he'll stay lol.

I'm not sure about Path to Exile over Condemn mainly because I don't want to ramp my opponents but I suppose there's a reason Path is $10 and condemn is 20 cents lol.

As for your other sugestions Duelist's Heritage and Koskun Falls were added, Windborn Muse and Archangel of Tithes may find a spot once I make some cuts, Rest in Peace and Torpor Orb actually stopped what this deck was going to do (Obzedat, Ghost Council, Spreading Plague, and Debtors' Knell specifically but like I said I'm taking it in a new direction.)

The others I'm iffy on but I don't know why I didn't add Austere Command before :p.

Again thanks so much for all the suggestions, for looking at the deck, and the +1!!

Edit: also I don't know what Forbidden Orchard does for me besides mana fixing?

So sorry about the time. I've been very busy!

Either way, some notes and cards that may be worth including: Tainted Remedy is generally pretty bad, and other people gaining life is almost never a big deal. Underworld Connections is really slow card advantage, a bit too slow for my tastes, but if you don't mind "sacrificing" a land for your card advantage you can keep it (just noting that it is a strong card when you have access to green and their plethora of land-untaping effects). Orim's Prayer, Hissing Miasma and Cliffhaven Vampire fall into the corner case of being sometimes good, but usually pretty awful, and are often worse than just including better cards. Divinity of Pride and Serra Ascendant are cards that I have used in the past, but are (surprisingly) bad. All they do is just sit there, be big and then die, and since this is commander most removal will generate a bit of extra value, but your cards did nothing, so you will simply fall behind on cards. Herald of Anguish is slow and does nothing for your deck. Kambal, Consul of Allocation might be interesting as a commander, but as just a single card in the 99 that you will likely draw late in the game it is pretty bad. Condemn used to be very good when you could still "tuck away" commanders, but since that change it has been pretty damn unplayable since it usually just a worse Path to Exile. Finally, Drana's Emissary and Grim Guardian are just bad cards.

Demonic Tutor, Council's Judgment, Sepulchral Primordial, Luminate Primordial and Archon of Justice are all just really solid cards that fit into many black and white decks regardless of archtype. Even Path to Exile isn't as good as these guys here! haha

Hope this helped! And one last recommendation- add a few more boardwipes, especially versatile ones like Austere Command!

I run a similar deck and figured I would make a suggestion. Try adding either Caltrops or Thunderstaff to the deck. That way humility will make all creatures 1/1, Intangible Virtue will buff your tokens so there no longer 1/1, then caltrops will destroy any 1/1 creatures if they attack (before damage is delt), or thunderstaff will make there attacks useless while buffing your creatures attack in a pinch if/when needed. Alternatively you could just add Orim's Prayer if you prefer to use enchantments so they work with your plea for guidance. That way you can sit back and watch your tokens increase each round till it gets insane and you can take everyone out. Also you might want to add cards like Leyline of Sanctity or Witchbane Orb that protect you from being targeted by opponents spells/ability's to the deck or at least the sideboard so you dont get burned or cursed to death.

Perpetual on Let's build a fort!!

No Damage From You