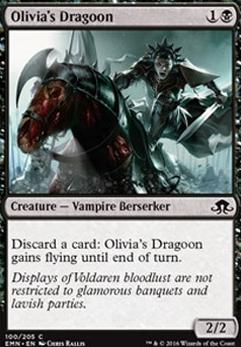 Olivia's Dragoon occurrence in decks from the last year

A Reanimator Shell
by modified 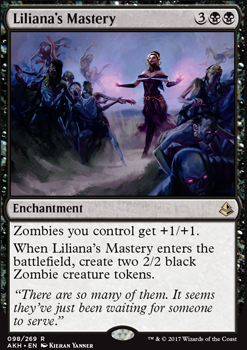 OtherWorldlyShadow on Combo Feature Not Working

I originally had the 3 without the Dragoon for a combo, and it was working, but after checking the combo page, I decided that I needed to at least make sure the discard outlet was considered.

Thanks Deadpoo111. I've got another madness deck which isn't held back by the vampire theme where I include Archfiend of Ifnir (amazing) and had Shadow of the Grave (though replaced it with Garna for the haste and lowering of the power level). Skirge Familiar would be great, I'll try him down the road but he's committed to my Gitrog right now as is Bone Miser. I also have Chainer in my other Marchessa Madness. Here's that deck https://tappedout.net/mtg-decks/marchesas-sanitarium/?cb=1575939263

This one is more of a fun side project specifically committed to the Vampire theme, with a unique take that abuses Marchessa's +1/+1. The more on theme each card can be the better. In this case Olivia's Dragoon would be a great addition, to minimize the amount of non-vampire themed discards I have to include. Insolent Neonate didn't make the cut before because it was a one time use, but after you reposting it I've reconsidered. Of course it could work considering Marchesa's ability! It'd be slow, once a turn, but no slower than Merfolk Looter without untapped effects, and potentially faster if I got a Cordial Vampire out and another sac engine. Then it could be every turn as sacrificing another vampire to cordial would put a +1/+1 counter on Neonate, sac/discard/draw with neonate, then when they both return, I could sac a third to put counters on both, then sac Neonate again. Nice, fun tech!

Vampire themed everything! What else you got?

Two cards I will always recommend for madness decks are Shadow of the Grave and Skirge Familiar . They are among the strongest discard theme cards out there and will definitely improve the deck.

If you need more removal or better control against decks with creatures, I'd suggest Archfiend of Ifnir , the card is amazing and if you don't need it, just draw a card off it.

In general, I'd add more discard outlets, yeah I get the vampire tribal theme which totally fits and stuff, but discard like Chainer, Nightmare Adept and Zombie Infestation are amazing. If you want a more vampire themed stuff, try Olivia's Dragoon or Insolent Neonate .

Finally, and this is with every emotion I can muster, HOW DARE YOU NOT RUN Bone Miser ! That card was built for this archetype and you ignored it. To quote Norman Osborn from the first spiderman movie: "I offered you kindness and you spat in my face." That's you, you're the face spitter. Please for the love of god put that card in.

Nice list. I also used geth's verdict and praetor's grasp, ended up switching geth's verdict to Ebony Charm because one of the other modes is useful. You need to find room for Veil of Summer . it's fantastic! you need more basic forests (4 minimum) and discard outlets. recommend Wild Mongrel and Olivia's Dragoon