Players can play spells and activated abilities only during their own turns.

I'm glad there were some helpful suggestions in there!

For the record, if you were curious about the Lethal Vapors route, it's trivially easy to skip infinite turns so long as you pair it with Grand Abolisher, City of Solitude or an instant-speed sacrifice outlet like Claws of Gix. I built a similar deck a number of years ago; you can see it here: Sir Not-Appearing-In-This-Game

legendofa on Would City of Solitude Be â¦

TL;DR: It would not be mono-green.

It might have been a green effect in the past, but it's not anymore. The aforementioned Dosan the Falling Leaf is already more than fifteen years old. Manglehorn and Root Maze affect artifacts, and the latter also affects lands. Root Maze also was originally printed in Tempest and hasn't seen any reprint in almost fifteen years.

Mono- control, at this point, seems to be largely limited to:

Every card that forces discard in Pioneer is also , and two of those three are split/aftermath. Every counterspell in Pioneer also includes . Even specifically stuff like Plow Under is long gone.

Cards like Dragonlord Dromoka and Marisi, Breaker of the Coil say that maybe there's space for casting restrictions, but the confuses the issue. I believe that if City of Solitude were printed today, it would require somewhere in its casting cost, and any would provide an additional effect.

DemonDragonJ on Would City of Solitude Be â¦

City of Solitude is a very interesting card in that it is a restriction effect in green, a choice that was likely made because green is an enemy of blue, a very controlling color. However, green does not have many restriction effects, any more, so I wonder if the city would be white if it was printed, today, using Grand Abolisher as a guideline.

What does everyone else say about this? Would City of Solitude be white if it was printed, today?

Hi, have you considered adding more wincons maybe 2ish (The Great Aurora is maybe another wincon) it's too few.

Also what do you think about City of Solitude 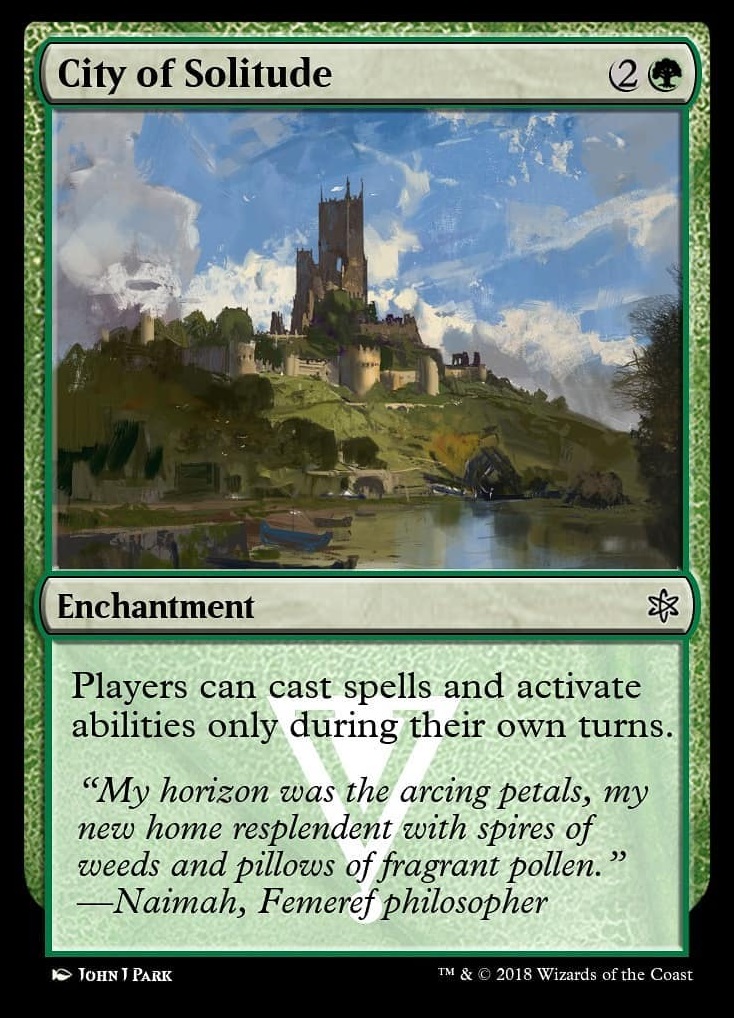