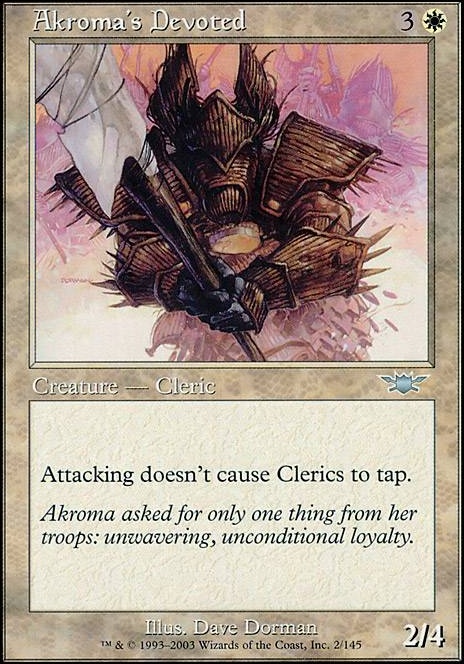 Clerics of the Underworld

I've never done clerics, so I can't tell you if it would work or not, but I've got some ideas I think you might like:

With all that lifegain, consider things that benefit it such as Sanguine Bond+Exquisite Blood (an instant player killer).

Kindred Dominance is a boardwipe where you can keep your creatures.

Path of Bravery could work well here too.

Weathered Wayfarer (finally got this card back from a friend, seems like a no brainer).

So Ayli is the Queen of chump blocking. You don't need big, scary creatures to beat your opponents over the head with. What you need are a lot of cheap, cost effective creatures that you won't mind blocking with, then sacrificing to feed Ayli. When it's time for you to attack, Ayli can clear the path for small creatures. Or, more ideally, you can just stall until your infinite combo comes online.

To that end: I agree with all the cuts and adds suggested above, and have a few more.

Get rid of:Vindicate and Utter End. These are one shot cards that do exactly what your commander already does. You might use them if you haven't got your life enough, but most of the time they'll be wasted slots.

Debt to the Deathless and Exsanguinate are both fine cards, if you've got ways of producing massive amounts of, and preferably infinite, mana. You don't, so I wouldn't bother with these.

Rune-Tail, Kitsune Ascendant is redundant with Ayli. You'll prevent your creatures from taking damage... And then sac them? Nah, just let Ayli do her thing.

Teysa, Orzhov Scion is great if you're planning on having a ton of White tokens. Otherwise, she just gets in Ayli's way.

Ogre Slumlord and Requiem Angel are both alright, except that they're expensive for their size and what they do, and they are sloooooowwwww.

Speaking of slow and over costed... Endrek Sahr, Master Breeder. Believe me, I know the temptation to play him, he seems great. I ran him in my Golgari sacrifice deck forever, and he NEVER performed well. If I was winning, he MIGHT put me a bit more ahead, but he takes a very high investment to be worth his slot, and Ayli shouldn't be wasting time with him.

Desecration Demon is large for its cost, and Ayli turns it's downside into an advantage. I like your Abyssal Persecutor for this deck- but this guy is the even better version.

Mikaeus, the Unhallowed gets extra value from your sacrifices. Optional; add Triskelion for another infinite combo.

War Priest of Thune. Valuable ability, easy to cast, not a problem to sacrifice.

Archangel of Thune. Turn those late game weenies into monsters.

Since by some strange coincidence I seem to have recommended a bunch of Clerics, here's a few Cleric tribal support cards, in case you're like me and can't resist flavor.

Edgewalker makes Ayli, among others, cheaper to recast.

Doubtless One can be quite large for not much.

Battletide Alchemist. If you can't block it all, don't bother, cause she'll protect that life total.

Going full cleric tribal isn't a great plan, but you can get some solid value out of them, since most of them fit Ayli's ideal card description; cheap, cost effective, decent body.