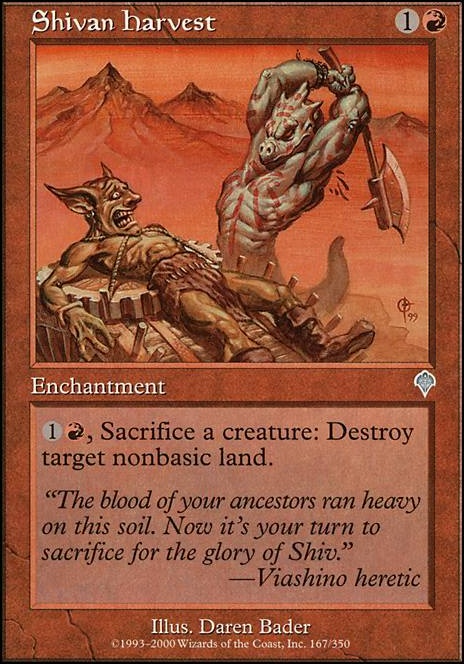 Zirilan of the Claw dragon fatty boom boom
by SufferFromEDHD 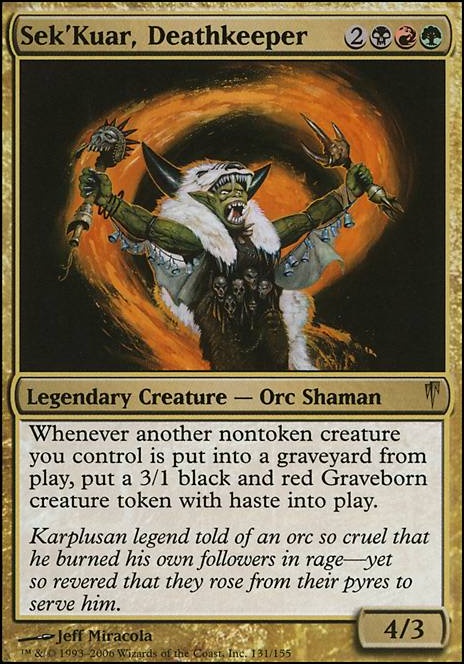 Very nice for a first deck and especially given the tight budget! You might like Nephalia Smuggler and Synod Sanctum since they let you keep the creatures you steal. Also if you find you need more sac outlets, Shivan Harvest , Carnage Altar , and Evolutionary Leap are decent.

Very Solid. There are some sub-optimal choices imo, but overall, nicely focused.

Shock is just not worth the slot in EDH. Leyline of Lightning is ok, but can be pretty mana intensive to keep using, especially in a land destruction deck, I don't see it being worth it. Guttersnipe is always nice, but with you creature wipes, you might kill it without a big payout. Keep an eye on how many X spells you have too, you might be shooting yourself in the foot, unless you add more artifact ramp, like a Fire Diamond and Ruby Medallion . Treasure Nabber can put everyone between a rock and a hard place if they are using artifact ramp. You'll also need some more card draw so that your single target removal keeps up with the board. Pyromancer's Goggles can help keep you up with 3 other players. If you fall behind, Acidic Soil and Price of Progress might be nice backups. Mana Web , War's Toll , Tectonic Instability might slow everyone down too.

Where is Blood Moon !? If you want to get pricey, Extraplanar Lens with Snow Covered Mountains is just mean with Blood Moon

Red has a huge weakness: Enchantments. You might want to add some enchantment hate, just in case. Even though they are costly Meteor Golem and Spine of Ish Sah are ok. Enchanter's Bane could fit in here real well.

I know you love your goblins, but I think Stuffy Doll is just better than Mogg Maniac . If you really want to anger people, mass land destruction is best: Ruination , Obliterate , Jokulhaups , Decree of Annihilation , and Impending Disaster are the most well known. Even an early game Tremble could be infuriating. If you your deck can get some tokens, or just fodder creatures Shivan Harvest might be fun. Mine Layer would cause a lot of frustration. So would Price of Glory , but it can hurt you too. I personally love Volcanic Offering because it can make someone mad at someone else. Bend or Break can divert some attention from you too.

You don't need to take any of these suggestions, but they might be nice ideas for a sub theme, or a different way to think about how the deck could be run. I am not looking forward to this monstrosity lol