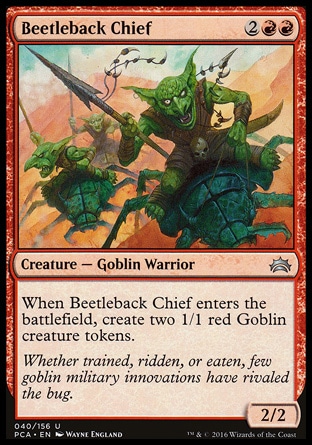 Beetleback Chief occurrence in decks from the last year 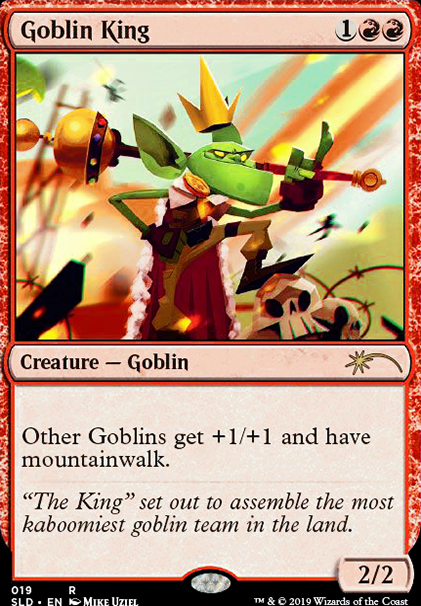 For a Krenko deck you want to go as wide as possible as quickly as possible so cards like these are very important Goblin Instigator , Dragon Fodder , Krenko's Command , Hordeling Outburst , Krenko, Tin Street Kingpin , Beetleback Chief , Empty the Warrens , and Door of Destinies .

Also if you're not on a budge Cavern of Souls .

As for what I'd cut, Lightning Crafter is good but is too slow for this decks game plan. Mogg Raider and Goblin Sledder are too much of an investment. With how wide this deck goes you will far out match your opponent's ability to block all of your things and even if we're assuming their all just 1/1s the difference between 25 damage and 30 damage isn't much. Sensation Gorger is interesting, but a bit too narrow, and very unlikely to actually workout. Akki Drillmaster feels like overkill with how many Haste enablers you have in the deck. Red Elemental Blast also too narrow, but if you have a lot of blue decks in your meta then I guess it is fine.

I debated Chandra, Acolyte of Flame as well for my purphy deck.

The difference between her and Tibalt (I would say) is that she automatically gets 2 ETBs for 3 mana, which is about as good as Beetleback Chief with 3ETB for 4 mana. And if she actually lives a turn, which i admit is unlikely, its 4ETB for 3 mana.

I bought one and am testing it out, for me she is replacing Mogg Alarm .

Finally got around to updating this list with new cards from the last few sets, as well as adjustments to the main deck that I liked. I also missed Beetleback Chief , that should have been in here for a long time.

I also cut the number of lands by 2 so more align with the actual performance of the deck. This change may make Walking Atlas and Terrain Generator less strong, so if you like the lower landcount you may want to remove these two to make room for more cool stuff!

Murderous Redcap is a strong critter to sac.

Squee, the Immortal , and Squee, Goblin Nabob are excellent to sac as well.

Lightning Greaves is better than mask of avacyn.

Heartstone is nice for xantcha and lyzolda

Honestly I would make my aim for this list to become exclusively b/r or red creatures. No black only except for staples like butcher, pawn of ulamog, krav the unredeemed (good use for pawn's tokens), abhorrent overlord, and maybe like erebos. Possibly Sheoldred or kuon, ogre ascendant but not necessary.

You might want to try Wort, Boggart Auntie and Garna, the Bloodflame for ways to refill your hand with the creatures you sac, especially wort if you pick up redcap, auntie's hovel, and some other goblins that generate tokens like Beetleback Chief and Siege-Gang Commander .

Grave Pact or Dictate of Erebos with Grave Betrayal can be pretty nasty. I don't know if they're budget friendly i forgot.