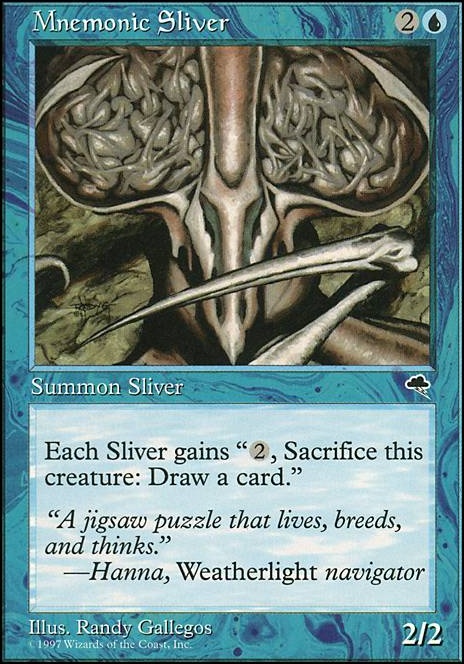 All Slivers have ", Sacrifice this permanent: Draw a card."

The Invasion is Coming
by Benwatts14 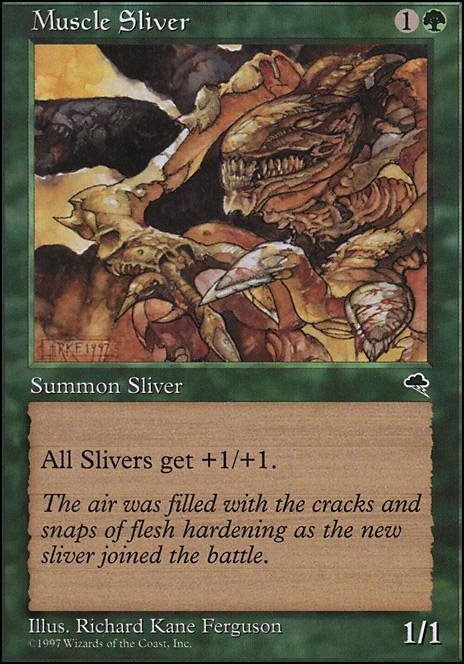 Sliver Overlord of Combos
by Diggadabasaurus

The Nightmare about the Hive Mind
by Olympian05

Also, some important cards for your five color deck would be some five color lands like Unclaimed Territory/Cavern of Souls or Gemstone Mine/Tendo Ice Bridge/Aether Hub. That way you dont have to dilute your deck with Chromatic Lantern or Gift of Paradise and you can just run more creatures or all 4 Collected Company

Gemhide Sliver and running all four Manaweft Sliver will also help with the mana.

I would like to nominate Sliver Overlord for tier 1 or 1.5. He can run Food Chain like Tazri. Here is my build: Slivers...The Top of the Food Chain. It is Shaper's Food Chain Tazri list with 5 cards changed and runs near identically. It is slightly worse since tazri has 3 great targets for wincons in Hagra Diabolist, Kalastria Healer, and Halimar Excavator. Overlord has 2 in Acidic Sliver and Cautery Sliver, but Laboratory Maniac (which is already in the deck as it's own wincon with library exile) gives Food Chain 2 more wincons for Overlord in Dormant Sliver and Mnemonic Sliver. I am kind of surprised no one realized Overlord could do this near identically to Tazri until I did over the weekend, but it is now known to all. While the Queen's Egg primer for the sliverball deck is fantastic, this list is way better and needs to go in over it. Happy Brewing.

It doesn't seem like you really need 4 Swift foot boots or the Shadow Sliver. You could take out two boots for two Darksteel Plate to protect the defender sliver, and then instead of the shadow sliver, run another create to attack with, or more ways to help combat slivers, like Cyclonic Rift I would also be careful about the shroud sliver because if they get rid of the defense sliver then you give the other person's shroud thats no fun. So those could come out as well and maybe use Metallic Sliver to steal their effects or Mnemonic Sliver to draw more

Grind Thanks for the +1 on my page! After you talked about your deck a little, I must admit I found the concept to be very unique...which can be a rarity when dealing with Sliver decks, as concepts can be rather repetitive. Honestly, even my deck isn't that unique. But yours is pretty cool and different.

Your deck seems to rely on winning in the mid to late game, where you play indestructible slivers and boardwipe constantly. You also play a lot of control spells to keep your opponents at bay...but honestly I feel that your deck can be so much more.

Also, you should add a bit more removal - Oblivion Stone helps because you can save one creature, and remove all others. It's a good alternative spell to use if you don't have any means to establish indestructibility for your broodlings. Adding more targeted removal would be helpful as well - Vindicate and Anguished Unmaking. Those cards I totally swear by.

Again, thanks for the input on my deck, hope my words help yours improve as well. Oh, and +1 for ya!

Dormant Sliver can give you infinite draw if you have an infinite creature combo in play.

Mnemonic Sliver can also do this for you if you also have infinite mana.

Root Sliver Your opponents don't get to say no.

You can check out my deck if you like, God Save The Queen, I didn't have the budget yours does, but ya might still be able to pull some inspiration from it :)

upvote for fellow queen deck! Down with overlord!

I think some people mentioned it before already, that Sliver Overlord is a better commander for this deck, although the queen is more iconic. Other suggestions would be Quick Sliver, Harmonic Sliver, Opaline Sliver, Mnemonic Sliver, Hibernation Sliver, Dormant Sliver, Constricting Sliver, Heartstone, Patriarch's Bidding... But those are personal preferences! Good job overall!

Necrotize on Looking For Infinite Combos With ...

I've been wracking my brain recently trying to find some way to break this commander. Basically looking for lord creatures or other cards that grant some combination of abilities to Mistform Ultimus that allows for an infinite combo.

Looking around, the only notable interaction that seems even remotely common is Mistform Ultimus + Oathkeeper, Takeno's Daisho + Wanderwine Prophets but that's situational at best.

Thought maybe there was something simple I was overlooking and a fresh perspective might help.

Here are cards that I think may be part of some sort of engine, but I can't fully piece them together yet.

Psychic Trance and some weird thing with Lullmage Mentor

Again, this might be some convoluted pipe dream, but I figured I'd ask.

IMO, certain slivers just don't have enough "Umph" to be in commander.

I kinda did the same thing when I made my first version of what I use now where I was just like "USE ALL THE SLIVERS!"

I really dislike Megantic Sliver although I've been told to use it. It feels like it costs too much mana and I'd never tutor for it, ever. If I'm spending 6 mana at once it's not for a single creature for a "small buff" considering what slivers are capable of. With Slivers, you're playing a weird ass Voltron deck honestly, so you don't need everything to have +3/+3.

Not a huge fan of Dormant Sliver because you don't really -need- card draw if you are tutoring all over the place. Although that's just me. Especially with all of the cheat in stuff, card advantage is all the deck does. Same opinion about Opaline Sliver unless your stuff is getting targeted all the time. I usually get wrathed before I get someone throwing spot removal at me.

I've never really had Vampiric Sliver or Virulent Sliver do anything valuable for me, but the poison counters do usually force removal out on him.

Basal Sliver is interesting. I've thought about using it before, but never had enough mana issues for it to be a logical thing to cut a card for.

Two-Headed Sliver is by no means bad honestly, but with things like Ward Sliver and Shifting Sliver you shouldn't need a 3rd option to try and get your creatures through. The way I play, I never throw out Shifting Sliver until it's time for the kill-shot. Same with Bonescythe Sliver. You kind of have to play sneaky from my experience. When you kill someone, you should get a "That went from 0 to 100 real quick, what the fuck." type of reaction.

I like to keep a rule of, "The first person to get scary in EDH dies unless they win the turn they get scary." You never want to be the first person to try and pop off, because in that case everyone still has all of their counters and removal ready.