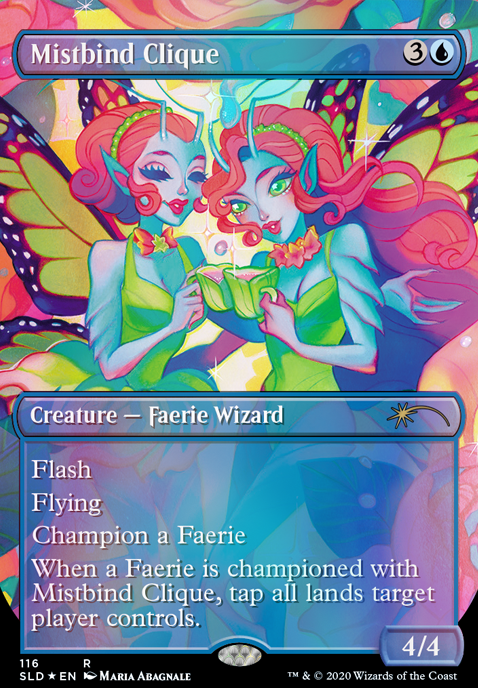 This Mono-Blue Faeries deck would probably be considered a mid-range tempo control deck. It has worked superbly for me in general play-test and I'm about to break it out in a more competitive environment. I call it 'Two-Step' because of all of the casting, bouncing and re-casting of the Faerie cards in it. It's a tricky deck to master but an absolute blast to play.

Mistbind Clique is your primary win condition, ideally getting two in hand along with either a Quickling or a Faerie Impostor to soft-lock your opponent. There has been a little confusion on how this combo works, so I will lay it out here step-by-step:

In the same vein you can loop two Quickling / Faerie Impostor and one Mistbind Clique but you will need five or six mana to do it consistently instead of four._

You don't need the Mistbinds to win necessarily, as pinging away with flyers while you counterspell or bounce often does the trick all on its own. The goal for any aerial assault is to get out a pair of Scion of Oona (or a Scion and a Phantasmal Image to copy it) - none of the effects that your faeries use actually target your creatures when they go off, so the Shroud effect doesn't impair you at all while allowing the two (or more) Lords to cover one another.

It's important to understand how your various cards work, both separately and in concert, and above all - show patience. Don't just bounce a threat with Brazen Borrower , bounce it after it has been targeted with a buff spell. Don't just cast Scion of Oona to get him out there, use it to counter a spell that targets one of your other creatures. Play Vendilion Clique in response to your opponent tapping land and try to dismiss the card he was about to cast. Don't just bounce a useful faerie back to your hand, use it as part of an attack and then bounce it back when it gets blocked. Remember that Mutavault can tap for mana and then activate itself, a useful trick when it comes to getting the most out of Spellstutter Sprite . Most importantly, always keep in mind the abilities of the cards currently out of play due to Mistbind Clique - a Quickling or Faerie Impostor won't just return the Mistbind back to your hand for re-casting, it can also easily get you another use out of Spellstutter Sprite , Vendilion Clique or even just a quick benefit from Faerie Miscreant or Faerie Seer .

Be patient with your approach and work towards the inevitable victory rather than getting too aggressive with early flyers. Know the meta and what you are targeting in your opponent's deck when it comes to counters. Oh, and don't be shy about turning over the cards that have left play, if only to make it harder for your opponent to remember what is poised to make a return to the game at any given moment.

I'm still tweaking the sideboard - obviously your local meta will have a lot to say in that - but here's a breakdown of the thinking behind each choice:

I bounce back and forth between Hurkyl's Recall and Ceremonious Rejection , packing 3 or 4 respectively.

Relic of Progenitus is obviously a staple against graveyard-based strategies, particularly recursion effects.

I'm running Spellskite as an option against Aura, Infect and Burn decks.

Spreading Seas goes after Tron and decks which lean heavily on damage from creature-lands.

Surgical Extraction is meant as a combo-deck breaker once you've successfully countered a potentially troublesome spell, though it can also deal with recursion threats from the graveyard as well. I'll put anywhere between 0-2 depending on the meta.