Last words of joseph of arimathea (1) 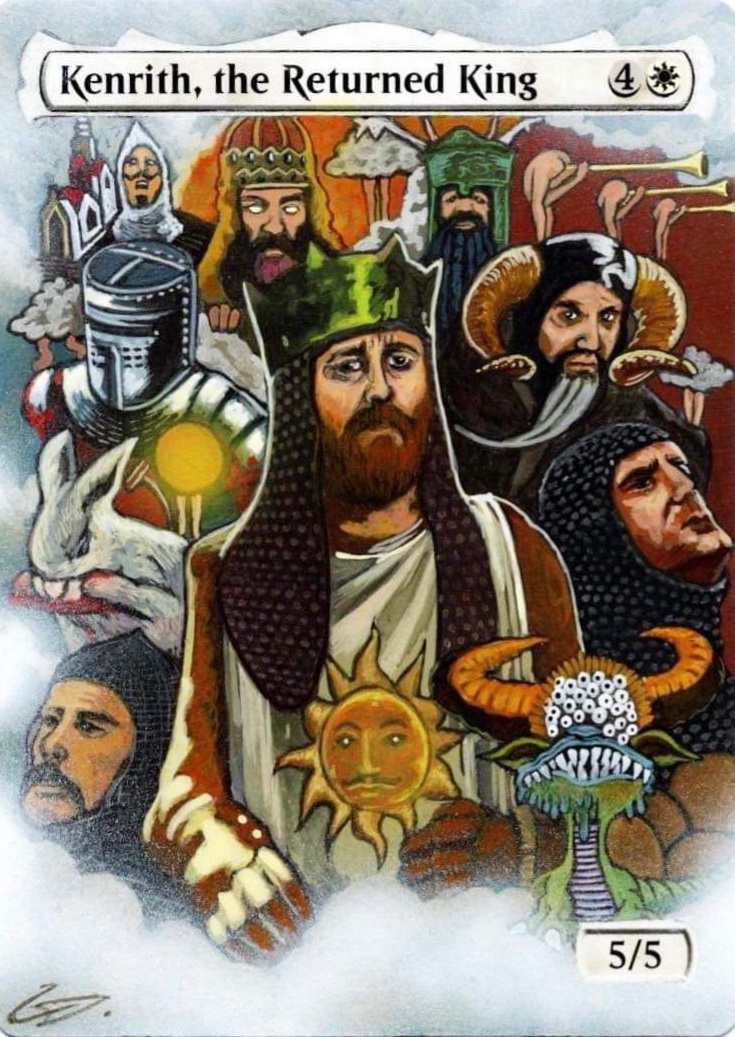 Now is the winter of extreme content. Made summer by some glorious new alters!!

We'll have 2 kenrith alters by the end of the year, saffi gets an alter, and the always awesome Joshua Robert Gibson has a couple brewing as well!

This is a continually evolving project, and while I play the Bant configuration more often these days I do love the initial 5 color build as well. Let me know what you think of the card selection and what aspects of the film are needing more development. Recently some of the smaller details are being added in the form of Basic land Alters.

We've added more swords and upgraded the manabase a bit, though it still needs more work.

My Alters for the deck have been updated as well, so enjoy those!

IMPORTANT! Do you like alters? Do you do alters? Want to be a part of this deck? Feel free to shoot me a message if you're interested in doing an alter for the deck! All skill levels and alter styles welcome!

Consider this space to be an anarcho-syndiclist commune where we sort of act as a supreme executive officer of the week.

This deck is awesome. I love playing it, and tweaking it. The movie is essentially divided up into assembling the knights, and then the main questlines for each character.

The Tales of Sir Robin, Lancelot, and Galahad. Other plotlines include: The cave of caerbannog which includes Tim the enchanter, and the rabbit. The knight who say ni are also present in the form of the knights of the reliquary, most of our ramp (questing for shrubberies) and some land alters.

Chaos warp : john cleese at a desk on the beach (and now for something completely different)

Thinking of doing some basic lands next

Father of swamp castle and guards: Recruiter of the Guard

Okay next step will be to post my justifications for cards included based on the movie, which you can debate the merits of in the comments.

Illusions of Grandeur - What behind the rabbit?

Khalni Heart Expedition - A quest for a shrubbery

Quest for the Holy Relic - A quest, sadly it won't grab a grail, but it's a fun way to find excalibur (sword of light and shadow) and equip it for free.

Cannibalize - In the frozen lands of Nador, they were forced to eat robin's minstrels, and there was much rejoicing.

Inquisition of Kozilek - no one expects it (mine is in spanish)

Safewright Quest - yet another land based quest given by the knights who say ni.

Wrath of God - Like those miserable psalms they're so depressing. Favorite alter in the deck hands down.

Crib Swap - This actually turns a creature into a newt, and if you use it on an opposing commander, they can "get better"

Destructive Revelry - lancelot at the wedding

King of Swamp Castle: You only killed the bride's father, you know.

Dismember - It's just a flesh wound

Hatred - Look at the bones!!

Goblin diplomats - Now go away or we shall taunt you a second time!

Aeolipile - This is the classic interpretation of the holy hand grenade.

Serrated Arrows - Message for you sir!

Staff of Nin -Tim the enchanter's staff, capable of pyrotechnics and partially responsible for Tim knowing so much. (Altered)

Sword of Light and Shadow - excalibur

Angry Mob - We have found a witch may we burn her?

Attended Knight - a knight with a squire

Court Hussar - Bedivere, or any knight

Monk Realist - The monks of the plague village

Prodigal Sorcerer - There are some who call him, Tim?

Rafiq of the Many - Galahad

Wall of Roots - a shrubbery

My maybeboard is a little strange: