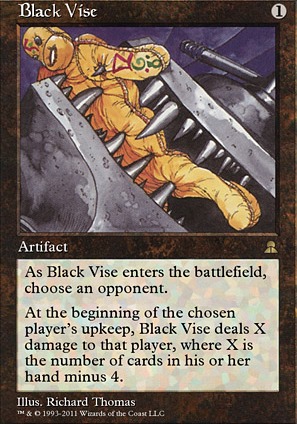 As Black Vise enters the battlefield, choose an opponent.

At the beginning of the chosen player's upkeep, Black Vise deals X damage to that player, where X is the number of cards in his or her hand minus 4. 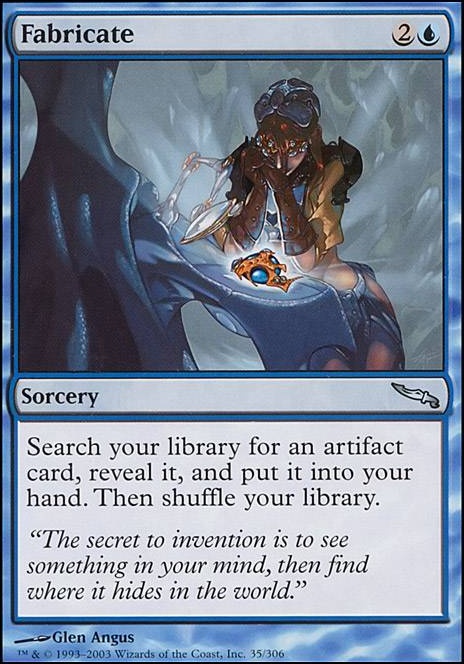 For 3x Curiosity , because I usually lose if I burn away my hand (which is easy to do lol), and I donât have any creatures in play. Curiosity should help with burning through cards.

The other card I want to try is 3x Raze , but Iâm mixed on this idea. I usually only play 4-5 land par game. Iâm scared this might not be a good idea.

Would 3x Raze even be enough to make land destruction effective in this deck?

Keeping Unsummon on the back burner.

DreadKhan: Goblin Guide and Black Vise is not a combo, period. its definitely not "turning games to his favor he wouldn't have won otherwise". if the opponent isn't drawing well (the requirement for vise to work at all, given the current list) then the reason this deck wins is because the opponent didn't draw well, not because of vise.

Evolving Wilds is pretty bad. you want Scalding Tarn and Volcanic Island . definitely keep Lightning Bolt . its too good not to use. Goblin Guide and Black Vise are not a "combo". it can't possibly be a "big part of winning" with this deck. you're not guaranteed to add a card to their hand, and the damage from Black Vise is mediocre at best. usually just gonna be a dead card. if your opponent has 5+ cards in hand, they'll be casting those cards. i'd advice getting rid of Black Vise entirely.

I see you found a card simulator to Black Vise that works the opposite.

The Rack with Bottomless Pit seems like a great combo! Also I thought you didnât want a combo deck. But seems like a lot slower way of winning a game. Especially if you take out most of your creatures.

I like your first idea, itâs simple. Clear the field so big guys can swing.

So the âclassicâ build for Oona, Queen of the Fae involves infinite-mana loops. Strionic Resonator + Basalt Monolith , Basalt Monolith / Grim Monolith + Power Artifact , or Isochron Scepter + Dramatic Reversal +rocks are the typical paths there. I understand if you donât want to go infinite, though.

If you choose to include an artifact ramp package, which I highly advise you do, then thirty-nine lands becomes way too many. Iâd recommend cutting six or seven.

With Laboratory Maniac , Demonic Consultation becomes an absurd card. Crafting your mana base to only have one basic and one snow-basic of each type allows you to run Tainted Pact , which I like more.

Ponder and Preordain are nearly auto-includes in blue EDH decks. Brainstorm is good if the deck has fetches, even if theyâre the slow fetches like Bad River .

I agree with xaarvaxus: Black Vise seems sub-optimal here. I actually think the whole âpunish for number of cards in handâ theme is sub optimal; with Oona, Queen of the Fae as the main win-con and Laboratory Maniac as a backup, damage plans feel superfluous. I advise sticking with the other two win-cons, and utilize the new slots to further that plan.

With your discard theme I'm not sure Black Vise is going to be optimally effective. Maybe replace with Altar of the Brood ?

You have Glen Elendra Archmage on your list twice [different art]

If you can get a Black Market to stick in play, it should gather a decent number of counters and help power up Oona's activated ability.

I don't think that Deathbringer Thoctar is worth it. He is simply to slow and isn't on the same page with what the rest of the deck is trying to do.

I also don't think that Whispersilk Cloak or Swiftfoot Boots are worth it. The likely hood that you are going to draw them is slim and for little reward. If you remove all of what I have mentioned you have room to add either (or any combination of) Shrieking Affliction or Black Vise . Since you are making them discard, hopefully they will eventually not have a hand and these will be a huge win condition in a single and multiplayer game.

I'm not sure that Mind Slash is worth it either, as the only card you have that you can freely sacrifice is Reassembling Skeleton . Instead I would recommend adding 2 Waste Not as he will help you strengthen your board or hand. I realize this is in your maybe board, but I think your main board could very much so benefit form having at least 2 Waste Not . It might even be worth it to remove ravens crime if you replace it with Shrieking Affliction or Black Vise .

I also so that you have removed Slaughter Games and I don't think that was good.I think that this deck would very heavily benefit from 3 Slaughter Games in your sideboard. If you lose the first game, sideboard them in and take out something important.

It might also be worth it to try to squeeze in some Raven's Crime .