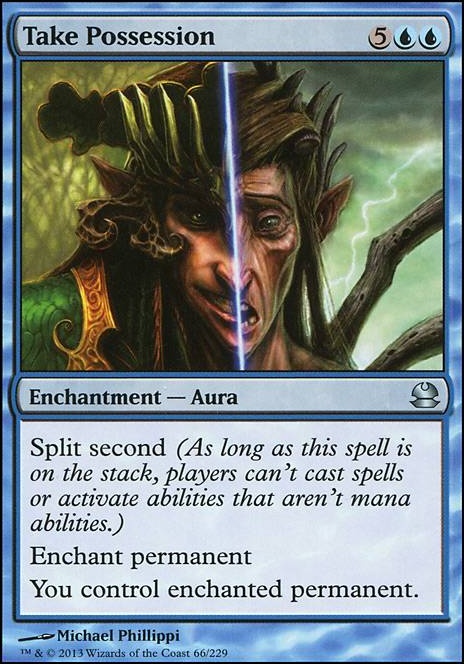 Mono Blue Control.... everything in play.
by Undead_Assassin 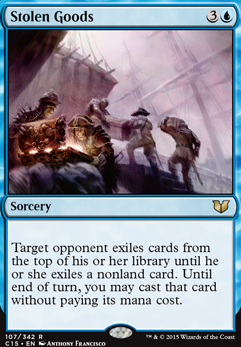 Hi, I'm looking around the net for some ideas on building a new common/uncommon commander. Currently have Ghave and Animar built. I saw your list and was curious why you're not running either Windfall to go with Narset, Parter of Veils or Retreat to Coralhelm to go with your put land into play creatures like Sakura-Tribe Scout? Also Thwart synergizes with Tatyova's strategy.

Seems like your only ways to win are combat damage / infect with token creatures made from Rise from the Tides, Sprout Swarm, or Zendikar's Roil. Maybe possible taking someones Eldrazi or something with Take Possession. Do you think Centaur Glade would be a decent addition to your token producers?

How has the deck played out for you? Decent win ratio? What's your meta like (very casual, mid-power, high-power, competitive)?

Are there any infinite combos that you've considered? Maybe something like Peregrine Drake + Ghostly Flicker + Mnemonic Wall or maybe Temur Sabertooth + Peregrine Drake + some lands that tap for 2 mana. Infinite mana basically just gives you a lot of token creatures though. Maybe Capsize would be your way to end the game on the same turn you get infinite mana.

Thanks. For this deck, I went with some more on-theme options. Sphinx of the Final Word can't be countered and makes all the instants and sorceries uncounterable; Nezahal, Primal Tide and Take Possession can't be countered either; Metallurgic Summonings gives you value even if your spells are countered; and the recursion gets your creatures back.

Inspiration From Your Foes

Haha thanks for the suggestions! I've opted to replace Control Magic effects with removal for now as reanimating the corpses with my commander achieves pretty much the same thing :p I'm considering Take Possession, Volition Reins or Dragonlord Silumgar to steal PWs though!

Expropriate is definitely worth a slot, I just don't use it cause it's not very exciting for me. Same reason I don't run Consecrated Sphinx.

BMHKain on Just one last favor for ...

Don't get the pattern? Maybe I can help you. They are cards w/ Split/Second. This means I can't cast anything to counter this, & would have to require a Mana Ability to counter it. What cards w/ Mana Abilities in all possible colors can counter these cards? We have Creatures that can't be Out-Flashed, Instants that can't be countered, & other nasty effects.

Any suggestions that can help? I'm thinking of replacing Mizzium Meddler for something that can counter this. Anything could help in this case. Thanks in advance. :)

Lazav, the Multifarious, Control and Shenanigans

Before actually playing the deck I was very focused on setting up a nice graveyard for Lazav using a bunch of wheel effects and looters. I also had a lot of evasive creatures included to ensure that Lazav would connect.

After playing the deck I think it works a lot better to just play the cards out without focusing to much about the setup for Lazav. As a result I cut down to just 2 wheel effects (I think) and no looters unless they are evasive creatures. I only run evasive creatures that I would not mind playing without thinking about Lazav (I still think Invisible Stalker is to good to not be included though).

The creatures that can protect Lazav are so much better then I ever thought they would be. It comes up every single game (multiple times) and it can really be a blow out when you are left with your (sometimes lethal) commander after people put in an effort to remove it, did some collateral damage and payed a price themselves. Cavern Harpy dodges everything (besides Take Possession which I have never seen played) but have the drawback of resulting in Lazav gaining summoning sickness when I replay him. I had a game where I played Lazav, someone tried to remove him (sometimes by killing the board) I would turn Lazav into Cavern Harpy to dodge. Then replay Lazav, new removal, harpy again, repeat for like 4-5 turns. Summoning sickness is a real draw back from Cavern Harpy but is non the less a really strong protection piece. Erebos, God of the Dead (and Thassa, God of the Sea when I manage to get one) can dodge a lot of removal without the issue of summoning sickness.

I've also found that this deck can do some really fast kills fairly easy when a little lucky. Simply playing Lazav on turn 2, Buried Alive on turn 3 to get Vector Asp, Phyrexian Dreadnought (and maybe Dimir Infiltrator) sets up for a kill on turn 4 on players who simply cannot block, and turn 5 with any evasion creature in the mix.

In a very very lucky scenario imagine this. Turn 1: Sol Ring, Dimir Signet Turn 2: Lazav AND Buried Alive Turn 3: Kill with and evasive lazav as a Phyrexian Dreadnought with infect.

But in most games where we simply dont draw Buried Alive, just playing the deck more like a control deck is really fun and work well.

The Power of Friendship | A True Love Story

mikazukyuun: It really depends on the direction you wanna take Tuvasa (combo, enchantment goodstuff, or aura voltron?). I don't think they are bad additions but maybe Altered Ego could be Clever Impersonator unless you want more clones? Regarding the more expensive cards, Replenish can be substituted with Open the Vaults. Treachery can be replaced with Corrupted Conscience/Take Possession.

Grafdigger's Cage, Torpor Orb and Humility. These you could perhaps run.

What about Control Magic, Take Possession, Confiscate, and Corrupted Conscience? That his commander or the problem and make it his problem.

What about chaos. Scrambleverse, and Thieves' Auction