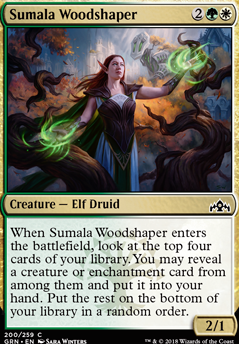 When Sumala Woodshaper enters the battlefield, look at the top four cards of your library. You may reveal a creature or enchantment card from among them and put it into your hand. Put the rest on the bottom of your library in a random order. Rosethorn Acolyte and Sumala Woodshaper would be my suggestions. Maybe not all of the woodshaper's but with the addition of the wishboard it's probably not as necessary. Oko, Thief of Crowns should try and find his way into this deck as its a great card by itself but turns out to be a combo enabler for Faeburrow Elder when you -5 and steal a permanent that is either black or red. Also might want to add Ashiok, Dream Render to the wishboard pile, enables the elder as its blue and black and is just hates out a multitude of decks.

I would replace captured sunlight with different four drop maybe something like Leonin Armorguard for a pump or Sumala Woodshaper for card draw.

Vman, I've cut the taplands. I agree with your assessment and after a quick test, I found the build worked. Thanks for the suggestion!

CaptDan, I agree with cutting Wayward Swordtooth . What other Dinosaur would you put in? (not Carnage Tyrant though because I can't spend 20 bucks on a card) Also, I've found that I don't really need more than three Remorseful Cleric because I can always just sacrifice a Thrashing Brontodon to destroy Fall of the Thran . I love Sumala Woodshaper because it ramps and gets my enchantments too! What would you cut for it?

Hey! If you want to improve the odds of having your combo online on turn 5 or 6, you need something to make sure you get both combo pieces most of your games. Remorseful Cleric should be a 4 of. Fall of the Thran , I guess you don't want 3 in your starting hand!

You should play something like Sumala Woodshaper to dig into your library.

The rest of your deck should support this combo. I'll remove, for example, the Planeswalker from it.

For the ramp part, I think you should cut some ramp, cut the Wayward Swordtooth , and have other things to ramp too like the biggest dinos.