Gaea's Revenge can't be the target of nongreen spells or abilities from nongreen sources.

Gaea's Revenge occurrence in decks from the last year

Forest of Many Colors
by Riding_the_Stars

A Very Quixotic Substance
by rhine0 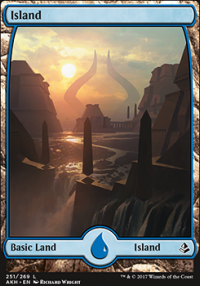 Always love to see a Reanimator deck featuring The Mimeoplasm! Have you thought about adding haste cards like Nether Traitor, Gaea's Revenge, or Spirit of the Night? When chosen as the first Mimeoplasm creature and combined with Lord of Extinction, Death's Shadow, or Impervious Greatwurm as the second target, they can make your commander a one shot kill play.

Great sucker punch deck! I always liked Gaea's Revenge and Spirit of the Night as primary haste targets for The Mimeoplasm. Doomgape and Death's Shadow are beefy secondary targets for massive +1/+1 counters in addition to Impervious Greatwurm.

As for getting fatties into the graveyard without tutors, Frantic Search, Breakthrough, and Careful Study pull weight.

Vexing Shusher could be used in sideboard instead of Prowling Serpopard .

It's a smaller creature but it's cheaper and if the opponent tries to counter anything, including a Blood Moon or Heroic Intervention , you shush them for one green.

Questing Beast is a new Throne of Eldraine card that is bound to become a staple in mono-green and should be included in mainboard.

Veil of Summer could be put in sideboard depending on your local meta.

Another direction you could take the deck is add some more mana-dorks and put in Leyline of Abundance . Just keep in mind that it doesn't synergise with Arbor Elf .

The Great Henge and Ghalta, Primal Hunger are cards I'm not sold on for monogreen stompy in modern since they could just be win-more cards but they might be great.

Fetches are good for thinning the deck lowering the odds of drawing lands later on.

For those reading the comments that whant some budget options Gaea's Revenge could come in instead of Carnage Tyrant and Castle Garenbrig instead of Nykthos, Shrine to Nyx . Altough the castle could be added as a one or two off to the current manabase replacing forests.