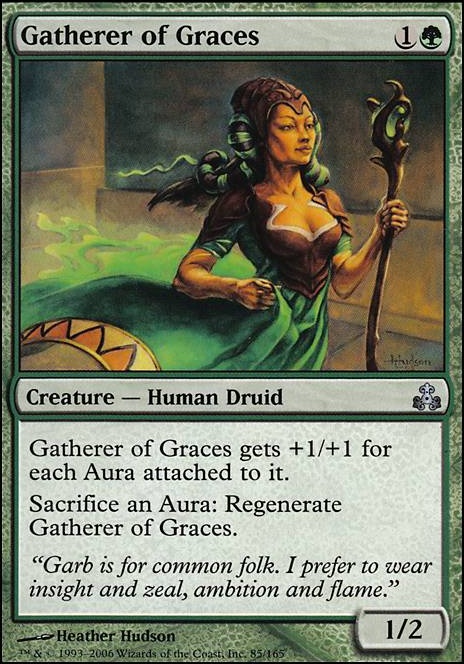 Gatherer of Graces gets +1/+1 for each Aura attached to it.

Siona, Captain of the Pyleas - Aura Beat Down
by ManaDownUnder 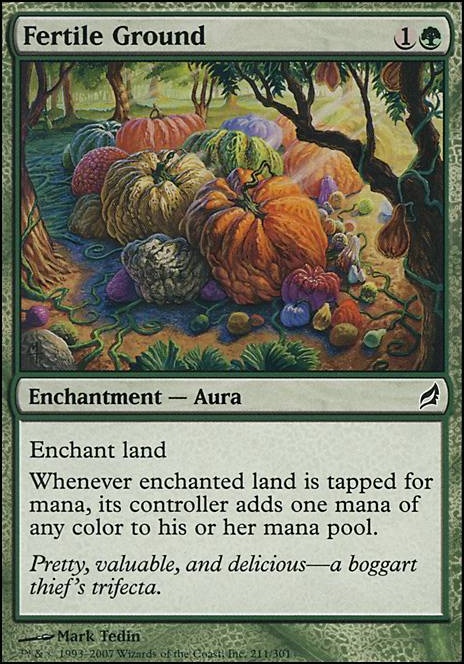 Estrid, the Masked
by NocturnalTrance

Tuvasa and her friends
by mmg044

ScionsStillLive It's no Rabid Wombat , but there are a few modern creatures with that ability: Graceblade Artisan Aura Gnarlid Gatherer of Graces

I think Gatherer of Graces might be a good uncommon for this deck. It has regeneration, at the cost of simply sacrificing auras (they don't even need to be attached to the Gatherer). The opponent might have a difficult time trying to kill it.

Also, Aura Gnarlid and Bramble Elemental are worth considering because of their synergy with auras.

So, play Rancor on the Bramble Elemental and get two 1/1's, sacrifice the Rancor to regenerate Gatherer of Graces, then Rancor returns to your hand, and repeat this process until the opponent is overrun with saprolings.

If you're looking for small changes, cut the Armada Wurm and doomed traveller for Nest Invader, then run Eidolon of Countless Battles in place of Acrobatic Maneuver and Favored Hoplite instead of become immense.

The issues you're facing are a little bigger than that kind of tweak I feel- the deck is working at odds with itself. You have some creatures that want creatures on the board to stall to midgame, spells dedicated to ending the game asap, voltron-type enchantments and flicker effects that destroy those enchantments. You'll probably need to drop some things to make room for the bits to join it all together, and that will take testing.

Flickering the enchantments is awesome, but felidar is pretty much the most efficient option without animating them. Most of these in blue but there are surprisingly few that just read permanent (because it gets sorta broken with Reality Acid) Venser, the Sojourner is memorable but its usually U/W/g for Momentary Blink Eerie Interlude and big, enter the battlefield creatures (stalling forThragtusk or Akroma, Angel of Fury).

The theros-theme enchantment matters cards provide some nice options for searching them and easing casting. Herald of the Pantheon in place of soul warden leaves casting them substantially easier and Starfield of Nyx provides some resilience in place of armada worm. Heliod's Pilgrim is a repeatable tutor able to be used alongside Tallowisp for a decent shot at enchant creature card advantage, with Auramancer but lacks a lot of the resilience of boggles (which you may want to look at for cards like Kor Spiritdancer, Spider Umbra etc). You won't be able to take advantage of that archetype due to being hit hard by targeted removal, but spells like Rancor with built-in protection should always be considered. Retether may be worth looking at if you see boardwipes.

Broadly speaking when making decisions about what to swap I'd look at three things- what do I want to do turns 1-2-3. Doomed traveller is difficult to utilise in the first few turns as you're not running Viscera Seer type stuff, and Soul Warden while providing nice resilience through lifegain doesn't have the turn two-three cards to back her up. Enchanting her with fists or cartouche is fantastic, but very vulnerable to disruption. I would not feel confident in a burn player not using lightning bolt given how long it takes to get everything else online, and countering your own aura with cloudshift the turn after feels so bad. However, if you have substantially more low cost cards it may be worth it- running a soul sisters package (Martyr of Sands/Soul's Attendant) will take most decks to midgame, Favored Hoplite/Herald of the Pantheon/Eidolon of Countless Battles/Gatherer of Graces/Evershrike/Hero of Iroas/Hopeful Eidolon/Sram, Senior Edificer/Sigarda's Aid Renowned Weaver/Strength from the Fallen/Wreath of Geists are all pretty effective if focussing on the go wide/cast auras plan, so long as you make sure they all work well together, and cards like Auramancer and Heliod's Pilgrim work to fix a couple of larger spells in the midgame Sage's Reverie/Spectra Ward perhaps. If you need to cement a board presence (t1 creature, enchant creating tokens) Umbra Mystic is worth a try.

Leonin Relic-Warder is an interesting sideboard option, especially alongside Oblivion Ring to loop herald, but if you find yourelf with decently sized tokens Sundering Growth is strictly better. Flickerform is only worth trying as a one-of.