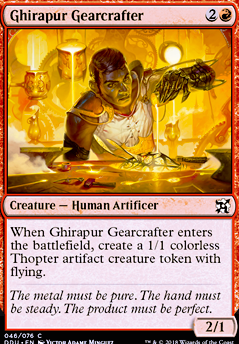 When Ghirapur Gearcrafter enters the battlefield, create a 1/1 colorless Thopter artifact creature token with flying. (A creature with flying can't be blocked except by creatures with flying or reach.) 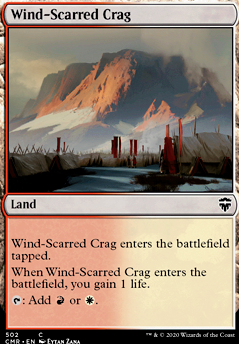 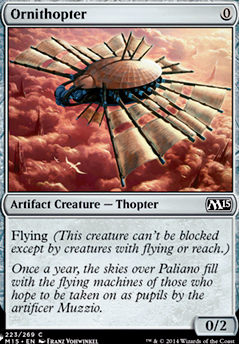 Switched Ghirapur Gearcrafter out and brought back Thopter Engineer

Hey! just played you. GGs. I took a look and have some random suggestions:

Fireforger's Puzzleknot -- > Pyrite Spellbomb. Though the puzzleknot might be a bit better right now b/c of lots of boros tokens, I think that Pyrite is just a better card overall. You can take out real creatures with Pyrite (flipped delver, some stompy threats).

I don't think Ornithopter really has a place here. It doesn't really represent that much damage. Maybe I'm wrong here though, b/c of the Reckless Fireweavers.

Maybe find a place for Ghirapur Gearcrafter? Seems decent enough :). maybe over some combination of Scrapyard Mongrel and Ornithopter?

Anyways, fun games! Take my suggestions with a grain of salt ;).

@forforforest, yeah I think it's an underrated card in pauper. It still needs a bit of support though as Ghirapur Gearcrafter is the weakest link, hopefully next set.

What do you think about dropping the bolts in favor of Vines of Vastwood?