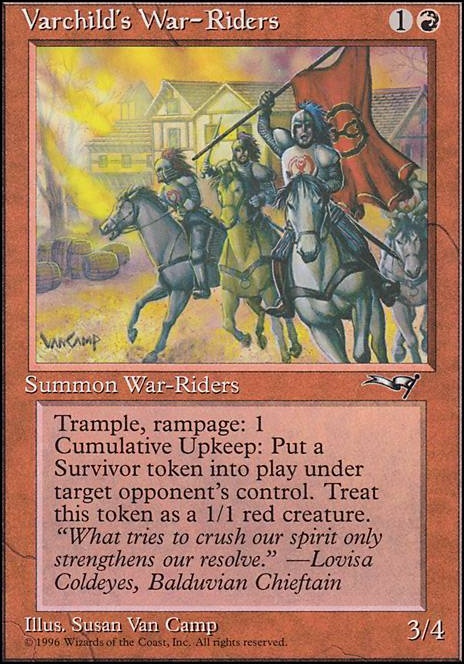 Cumulative upkeep-Put a 1/1 red Survivor creature token into play under an opponent's control.

Trample, rampage 1 (Whenever this creature becomes blocked, it gets +1/+1 until end of turn for each creature blocking it beyond the first.)

Attack me, I dare you (Boros Control)

Fun looking deck! I have a kind of long list of suggestions for you. Some of them are specifically suggested to deal with your draw problem, but not all of them. I will say that I wouldn't expect that you would try to fit all of these in here, and I'm also shyt at telling anyone what to cut from their own deck. So I'll drop this list here and let you make of it what you will.

In a similar vein to the hunted cycle, there's also Varchild's War-Riders which can continually be used to give oppoenents tokens.

Witherscale Wurm is an interesting card here as well with the mechanic to give your oppoenents' creatures wither.

and Goblin Diplomats are good if you did want to use goad.

Assault Suit might make for an interesting card here.

Yurlok of Scorch Thrash is also decent as they can ramp each oppoenent but at a cost. Selvala, Explorer Returned (and even Selvala, Heart of the Wilds ) are in a more group huggish vein but could be decent.

Sorry. I have just seen that that Varchild's War-Riders is already in the deck.

Martiallawe thanks for all the suggestions! I was trying to limit the amount of equipment because I didn't want a plug and play of my Zurgo deck but it turns out I might have to. Hammer of Nazahn is legit worth the $$. Puresteel Paladin is super good and I totally forgot it existed! Varchild's War-Riders is a flat upgrade, not being able to be attacked isn't worth the extra 1/1s or mana. Thanks again, my dude!

I personally think Kelsien might work better with more of an equipment focus (and it seems like that might also be what you're thinking with the Stonehewer). It's a little bit up there in price, but have you thought about Hammer of Nazahn to give you free equips as well as indestructible on Kelsien? Along that same line, Puresteel Paladin would be a great addition for card draw and free equipment effects. I'm also a fan of Helm of the Host as it just snowballs out of control unless it's answered immediately. Maybe add a Darksteel Plate, Mask of Avacyn, or Mirror Shield for some additional protection if part of the reason why you are having issues getting experience counters is due to early removal on Kelsien.

Also, I'm guessing that the reason for having Varchild is to generate 1/1 tokens that you can snipe for free for experience counters, right? If so, you might want to consider Varchild's War-Riders instead since it would work much better with the deck's curve. You can drop it on 2, it makes a token on the upkeep of turn 3, and then you can play Kelsien & immediately snipe the token for a free exp counter - probably a bit quicker than having to drop Varchild on 3 and having to connect a swing to generate tokens.