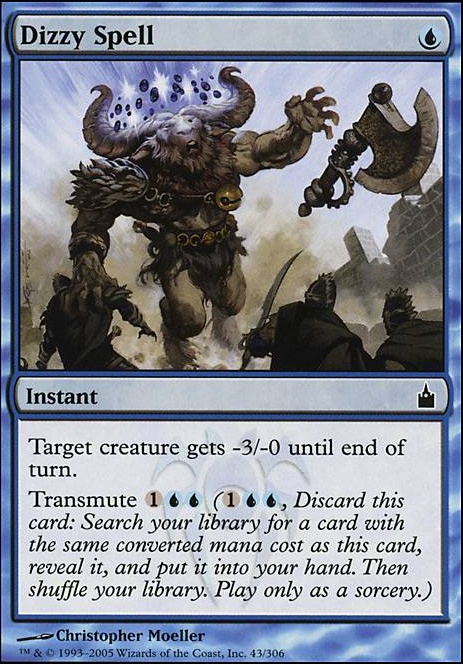 Dizzy Spell occurrence in decks from the last year

Hey, Niv soulbound to Lookout for the combo needs an instant way to shuffle your hand back into your library or you will deck yourself without killing all your opponents.

Lookout's paired ability is not a may like Curiosity and Eye are. Once you combo with Lookout you can't stop the loop to cast a sorcery. Emergence Zone is an option; sac it before you combo which lets you cast Winds at instant speed. Zone lets you assemble the entire Niv combo at instant speed in response to anything which can make the combo even more powerful. Whirlpool Warrior if it's on the battlefield before you combo can sac itself to shuffle or can cast it with flash to get it's ETB shuffle.

High Tide and Seething Song can help to ramp into Niv quicker. These two spells in combination with having flash from Zone can make lots of mana to combo with Niv including the you need to cast Niv and Winds. Dizzy Spell is worth adding to transmute for Curiosity since Gamble is the only tutor to get Curiosity. You really should add the two less expensive Fetch lands: Flooded Strand and Bloodstained Mire to give you more chances of getting Vents and to replace lands in the manabase that ETB tapped.

Shooting Fish (and Frogs) in a Barrel

Dizzy Spell could help tutor out Wolfhunter's Quiver, or help in a pinch. Definitely a fun idea

When I saw this deck I was pretty intrigued, especially since I love big blue creatures ( Stormtide Leviathan was my first rare from 2013 core set back when I joined). I was inspired to quickly come up with my own version: Ula's Temple. One recommendation I have is Dizzy Spell ; it acts as an additional copy of quest for ula's temple, plus it can also find clockspinning and shrink a creature in a pinch. I tried to use creatures like Judge's Familiar as disruption instead of instants to help my chances with Ula's temple; plus, without the need to leave mana open, it makes more sense to run Contentious Plan instead of Steady Progress . Grozoth will let you tutor for multiple inkwell leviathans, which would be pretty devastating. Also, Street Wraith would up your creature count and thin out your deck.