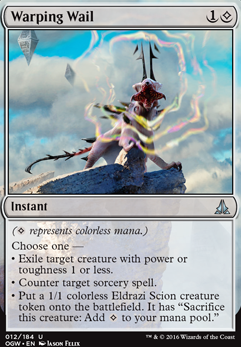 Hey all! This is my take on a colorless Oathbreaker deck. With an average CMC currently sitting at 2.50, this deck is aimed at being able to compete with the more competetive decks, such as Ral, Storm Conduit or Narset, Parter of Veils . Let's begin!

The biggest contribution to the total price is Mishra's Workshop . Replacing it with a Wastes would reduce the cost significantly.

The game winning plan is to create "infinite" colorless mana. Once that is achieved, we can spend the mana into Walking Ballista , essentially machine gunning our opponents life down, regardless of what the collective life total between our opponents is! Since 3 pieces are required to complete the combo, we need to be able to slow down our opponents. We do this, by incorporating an effective stax package. 1/6 of the deck consists of stax pieces. So, it's fairly likely to see some in an opening hand. Since this is a colorless deck. It is also likely that our opponents will focus their control on the other decks that operate faster. This is perfect, because it will give us additional time to assemble our combo pieces and pull off the win!

1.Have all permanents and any other source of two mana on the battlefield.

3.Spend that mana to activate Basalt Monolith 's untap ability and put it on the stack.

4.Generate two mana from any other source to pay for Rings of Brighthearth triggered ability, copying the untap ability from Basalt Monolith , and putting that copied ability on the stack.

5.Let one untap ability resolve, and tap Basalt Monolith to generate in response to the second untap ability.

6.Let the second untap ability resolve and tap Basalt Monolith to generate for a total of six colourless mana floating.

7.Repeat steps 3-6, using the mana generated by Basalt Monolith to pay for every iteration after the first.

Basalt Monolith + Rings of Brighthearth + Sensei's Divining Top : Go infinite then copy the top's effect. The first top effect will resolve drawing you a card and putting back on library. Second top effect resolves drawing you the top, but you don't put it back on library since it is in your hand and not on battlefield. Repeat to draw your entire deck.

Challenges of being colorless

Speed - There are hardly any relevant colorless instants, our answers come from the abilities of permanents

Acknowledging the weaknessed of this build preemptively, will only help the owner piloting the deck. Understanding how and when to interact is a part of learning how to utilize this build efficiently. Since this deck runs on a low total cmc, this consistency of the deck is high, compared to more casual builds. An upside to it being colorless though, is the owner can invest in cards other than the mana-base. Moreover, alot of these cards are "staples" in midrange stax decks. So the cards are reusable in other competive builds. Builds including other formats such as, C-EDH decks.

Dealing with other Competetive Decks

Warping Wail successfully counters only sorcery spells. Luckily, most of the more competetive decks rely on a "sorcery speed" Signature spell to perform their combo. Some examples would be:

Other powerful, common, combos also can be disrupted by warping wail as well. Combos such as...

The deck transforms the tokens that Saheeli, Sublime Artificer creates, into their combo pieces, which are...

Tandem Lookout can be exiled with Warping Wail first option of exiling a creature with power and toughness of 1 or less!

When Silent Arbiter is on the field, it helps prevent decks that run token generating combos, such as any Kiki-Jiki, Mirror Breaker combo, from auto-winning when assembled aswell.

Synergies with Cruicible of worlds

Strip Mine or Wasteland can be used more than once.

Inventors' Fair can be replayed to search for our combo pieces

Lotus Vale and Scorched Ruins force you to sac untapped lands when they enter the battlefield. With Crucible of Worlds out, you get a chance to replay the lands that were sacrificed later on.

If you liked this primer, make sure to +1 upvote it!. Thanks for reading!