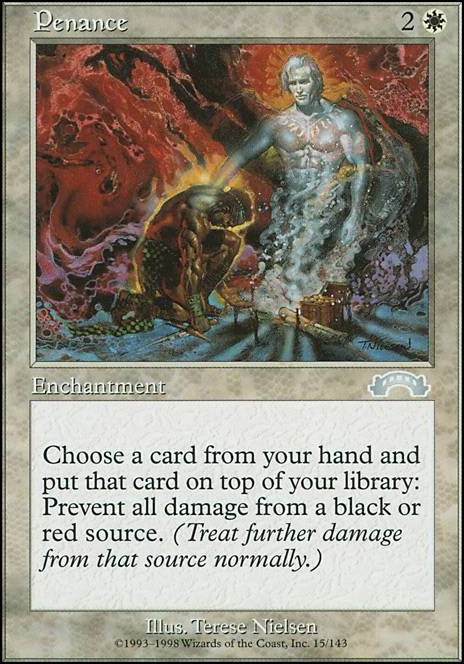 Put a card from your hand on top of your library: The next time a black or red source of your choice would deal damage this turn, prevent that damage.

off the top
by rodnayraps

Elsha of the Infinite
by Deathrx I'd recommend including more Top of Library Manipulation cards and cards that allow you to return Bombs you draw to the top of the library. You can consider some of these:

Are some others you might be able to use

Penance with Elsha is spicy.

Dissipation Field could be good here. Rattlesnake effect that you can flash in with Elsha for a big effect.

goldrhino
Good to know that you have found success with Cloudstone Curio ; I don't actually own one in paper, so I've never actually played it in a real game.

Switching gears, I don't think Faeburrow Elder is playable in this deck. It's just a worse Bloom Tender , which I am also not running for the same reason I'm not running any of the typical 2 mana ramp spells- it doesn't ramp into Selvala, and once I have Selvala, the extra mana it does provide isn't relevant.

FroggyTroller just wanted to rescind my original thoughts on Cloudstone Curio in the deck. I did put it back in and focused on getting it out for a few games and it was a bomb every time. Not exactly sure how/why the value didn't seem to be there before but in a few games it's been a monster.

Also, just wanted to comment again on Penance . I know it's a bit convoluted, but if you specifically have Selvala, Umbral Mantle , and Penance on the battlefield AND you have mana in the bank or a way to make sure you're at least netting 3 with each Selvala tap, you will never pass priority to your opponents and you will make them draw themselves to death. Selvala's ability is a mana ability and can not be responded to by opponents by rule. Umbral Mantle's untap is part of the cost of the ability, as is Penance's activation cost of putting a hand on top of your library.

Good to see other Selvala players out there still keeping up with the deck.

What do you guys think of Faeburrow Elder from the new set? Thinking about giving it a tryout.

I feel you could make this more streamline with more low cmc noncreature artifacts and a few good ways to protect your commander.

I'm adding Altar of the Brood into mine. Also Isochron Scepter and Dramatic Reversal .

I'm building 2 or 3 versions with different synergies. Sorcery Storm, self mill, and unlimited artifacts. All 3 will have at least 1 win con.

Also, holy shit didn't know this was a card till today. Penance

Cloudstone Curio isn't there as a tutor target (although it can be if it wins the game), especially since only one card in the deck can tutor for it ( Enlightened Tutor ), but rather because it has just as many combo applications as Temur Sabertooth , so it's one card that offers many more potential combos.

I was probably going to try Ranger-Captain of Eos soon anyway, so it's good to know that you've had success with it.

While Storm Seeker sounds funny, I can't think of a single scenario in which I would want it, so I don't ever see myself playing it.

Penance seems like too cute of an interaction with Selvala and not nearly enough upside. a) It doesn't let you win without passing priority, because you still need to untap Selvala somehow, and that would require passing priority, and b) if your opponents receive priority, they almost always will have a way to stop you (because they are drawing their entire deck.

I'm not entirely sure why I'm not running Sylvan Library , I guess it just never made it's way into my deck. I'll probably throw it in sometime.