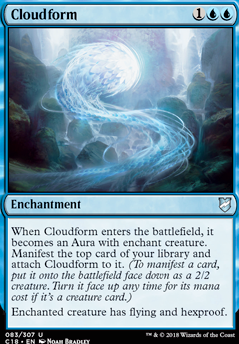 When Cloudform enters the battlefield, it becomes an Aura with enchant creature. Manifest the top card of your library and attach Cloudform to it. (To manifest a card, put it onto the battlefield face down as a 2/2 creature. Turn it face up at any time for its mana cost if it's a creature card.)

Enchanted creature has flying and hexproof.

Cloudform occurrence in decks from the last year 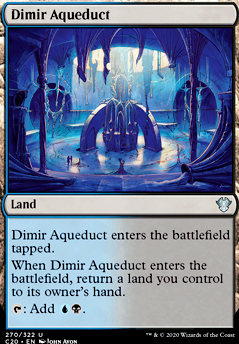 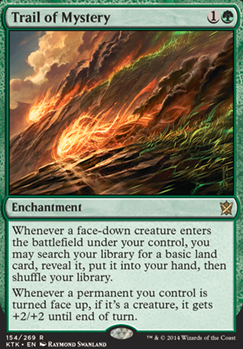 And to support that offer Cloudform Rageform Lightform

These are the only cards like this and only come in these colours, Ugin colours if you will

@smackjack note there's also Cloudform and Gideon of the Trials

Also, Scroll of Fate is just as good as Lightform and Cloudform if not better.

Adding on to the whole Parallax Tide discussion, when you go infinite with Strionic Resonator the exiled targets remain permanently exiled. If you use the stack to right, you can permanently exile your target. With any card that has an exile effect that is separated from the returning-to-play effect ( Angel of Serenity but not Banishing Light ), then while the exile effect is on the stack, you use strionic resonator to copy Brago's ability. Your card will leave play and trigger its return-to-play effect before the original exile ability even resolves. That means it will never return once its been exiled. That's why Parallax Tide , Parallax Wave , and Angel of Serenity are so powerful.

Cloudform and Lightform are great value engines. Scroll of Fate is just as good. Free cast anything from your hand? Sign me up! Not to mention, you get to use it twice a turn. They are also wincons for when you go infinite with strionic resonator.