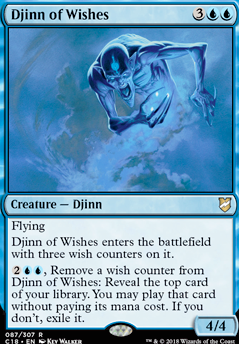 Djinn of Wishes enters the battlefield with three wish counters on it.

, Remove a wish counter from Djinn of Wishes: Reveal the top card of your library. You may play that card without paying its mana cost. If you don't, exile it.

Djinn of Wishes occurrence in decks from the last year 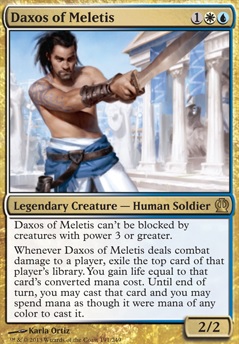 -4: Reveal the top card of your library. You may play that card without paying it's mana cost. If you don't, exile it.

-8: You get an emblem with "If you would draw a card, instead search your library for a card and put it into your hand. You have no maximum hand size".

A genie freed from the restrictions of a lamp. The second ability is Djinn of Wishes .

How about a version of Chandra that doesn't focus so heavily on Burn. Doesn't even have to be Mono Red.

Gidgetimer on Can I counter my own ...

Spells and abilities are not removed from the stack until after they have completely resolved. Djinn of Wishes ' ability plays the revealed card during its resolution and as such is still on the stack when targets are chosen if the revealed card targets.

At this point the Djinn's ability finishes resolving and is removed from the stack. There is then a round of priority (or multiple if anyone takes any actions). Then the Tale's End fizzles and is put in your graveyard for not having a valid target when it attempts to resolve.

Djinn of Wishes gatherer ruling showing that the casing is during resolution:

If you wish to play the exiled card, you must play it while the last ability of Djinn of Wishes is resolving. You canât play it later in the turn. A spell cast this way may be cast at a time you normally wouldnât be able to cast a spell of that type, but other restrictions (such as âCast this spell only during combatâ) are enforced.

Comprehensive rules showing when objects are removed from the stack:

I activate Djinn of Wishes ability and reveal Tale's End . I don't want it exiled, so I use it. but the djinn is the only legal target at the moment. Does Tale's End go to the gravyard because I used it, or does it go back to the top of my library since I countered Djinn of Wishes activated ability?

I would remove Venser, Shaper Savant. He's great because he is an Unsubstantiate, but after that he's just a Will 'o wisp. Hostage Taker is giving you very real card advantage, ramp, or removal.

Here's some other tech I've found: Primordial Mist was in the precon for a reason. You can blink the manifest cards to flip them for free.

Djinn of Wishes is fantastic with your commander.

Perplexing Chimera is one of my favorite cards to use with Venser the Sojourner, and Animatou has that same synergy.

Iâm not a fan of the primordials since their value relies on what your opponents have in their graveyards.

If you want to focus on the flicker theme, I strongly suggest Parallax Wave. It has been very effective in my deck. I think a lot of the cards in your maybeboard are exactly what you need in the main deck. I guess you just need to get hold of them and replace some of the weaker cards currently in the list like Djinn of Wishes and Sphinx of Uthuun

You can go aggro control. Most of the creatures do hurt (5 power) with effective etb effect/s. Flickering them reuses their etb and give pseudo vigilance.

I will raise a disclaimer that esper tends to run "good stuff" because, well, there are good spells that have little to no alternates.

Sepulchral Primordial -> another good one, getting creatures in opponents' gy

Vela the Night-Clad -> could be a win con, when you flicker enough

Sun Titan -> not sure if you have many 3cmc permanents, but usually great to have

Chancellor of the Spires