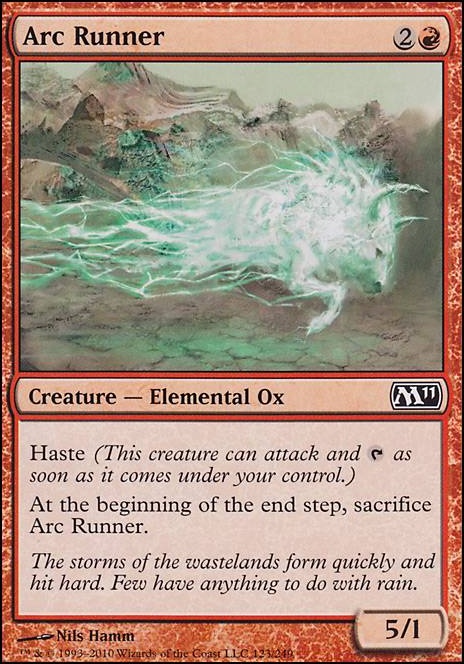 At the beginning of your end step, sacrifice Arc Runner. 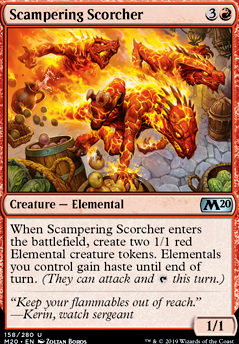 I don't really like Pyric Salamander here, it just uses up so much mana... if you agree that it isn't working well for you, maybe Mardu Scout instead? Keldon Halberdier is also a creature that's kinda like Ball Lightning, but probably a bit too slow.

Innocent Blood could be a nice alternative to Diabolic Edict , but it's sorcery speed.

I'm a big fan of Temur Battle Rage , it could give your Arc Runner the trample it needs to not just get chump blocked.

Literally posted my own rendition of the deck the same day. I'm incredibly happy that more people are tinkering with the raw power of recurring 'suicide' elementals.

I personally went for a more 'tribal-ish' take, with creatures like Flamekin Harbinger to tutor for the other elementals, Hellspark Elemental due to its natural recursion via its own Unearth ability and Hell's Thunder over Arc Runner due to it having a better chance to get the damage through thanks to it having flying. Also, 2x Assault Strobe for that turn 2 Assault Strobe + Lightning Skelemental + Unearth for 12 damage and making our opponent discard most of their hand.

I still think you have too many suboptimal cards. Lightning Bolt is a strict upgrade over Shock , Soul's Fire / Reckless Abandon is worse than Fling and Seething Song / Mark of Mutiny does nothing. Arc Runner is also terrible because it can be easily blocked and it becomes 3 mana do nothing.

A good rule to abide by is to make sure your deck does one thing well, and only that one thing. Your deck right now is a bit all over the place, and there is a glaring flaw where you have no real way to refill your hand. Your sideboard is also weak to White Weenie, which is a popular deck right now so Electrickery is compulsory. I also don't see a situation where Perilous Myr can be boarded in. As a rule, sideboard is where you run hate cards, and tech against hate.

Consider also running some dual lands such as Swiftwater Cliffs . Cycle lands are a good idea but Lonely Sandbar is better than Desert of the Mindful .

Ok, the first problem I see here is the lack of consistency that is caused by having many 1 or 2 copies of diferent cards. The second is that you have some cards that have anti-synnergy with one another, like Ampryn Tactician (Which is better at a weenies deck) or Battlegate Mimic (There isn't enough multicolored cards to justify it). The third and major one is the lack of a winning plan, in a format that is characterized by cheap removals, an aggro deck needs to be efficient in swarming the board or outvaluing the opponent. Your deck does neither of those things, it has a lack of cheap mana-efficient creatures and the presence of cards that have a negative impact on your total value, like Balduvian Horde and Arc Runner, causing it's poor performance.

Ahzrei I really like the theme of the deck you have here, but right now I see a few issues.

First of all, you have 62 cards in the deck right now.. Assuming you want to be running a 60 card deck, that should be fixed.

Arc Runner is a nice card, but think of this.. If your plan is to hard cast him, and then play Rite of Consumption before end of turn.. this is a combo that'll have to wait until turn 5 at the soonest. Not to mention that he is easily chump blocked once your opponent has the slightest idea of what you're up to (since he doesn't even have trample).

Here is what I would do:

-4 Arc Runner (Too mana intensive to allow for shenanigans)

-4 Heart-Piercer Manticore (Too mana intensive. Also, Rite of Consumption would just be a faster alternative here.)

+4 Demonlord of Ashmouth (This is your win con. He also allows you to sac him once at no cost = profit.)

+2 Culling the Weak (This card really speeds things up for you, potentially giving you a T2 Demonlord of Ashmouth.)

-4 Apprentice Necromancer (Soonest he is useful is turn 3, after some thought on this one, I am thinking this:)

+4 Undying Evil (...fits the theme a little better than the Necro, & useful in more situations.)

-2 Sneak Attack (With the new lowered mana curve here, I don't see as much need for this card in the deck.)

(You should also look at fixing your mana base. Even without making changes to the deck, you should be more swamp-heavy than mountain-heavy.)