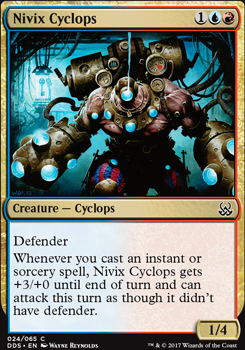 Whenever you cast an instant or sorcery spell, Nivix Cyclops gets +3/+0 until end of turn and can attack this turn as though it didn't have defender. 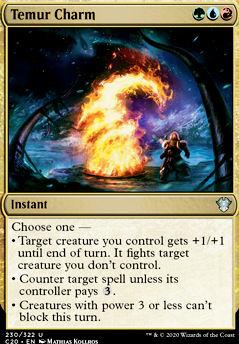 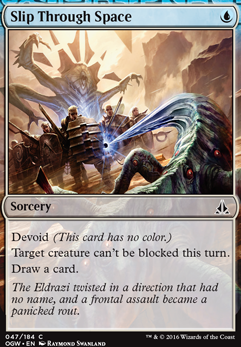 cantripsandbrahms Really that nombo in this modern era is not good, imagine you play TiTi with pyro delver, etc, opponent cast a Fatal Push, Terminate, Path to Exile, Teferi, Time Raveler... and you'll get a poker face xd. I like Nivix Cyclops but is too slow, I prefer using kilng field, yeah he dies to bolt, but you have cards to defend it( with counters or something like Dive Down). A good idea is adding 4 Manamorphose to cast a lot of cantrips//spells with a kiln fiend :D. Feel free to join our Delver server in discord : , here we can help you better than tappeout ;D.

Daron6 I like the Faerie Conclave idea I'll add one of those, and ill def replace the homunculus w/ another copy of the scions. I like him alot, but I think ill have save him for a instant/sorcery themed commander deck (as w/ many of the cards in the maybe board). I also do think it'll be smart to add more kiln fiends but maybe one Nivix Cyclops because it doesn't die to bolt? what do u think?

sergiodelrio Daron6 I was aware of the nombo, but I thought it wouldn't matter if my bored state got wiped becuase I would just win. If thats not the case I'm def not opposed to subbing them out for another young pyromancer and a kiln fiend or something.

It has occurred to me that the oracle text of Glyph of Destruction refers to "target wall" not "target creature with defender," so unfortunately things like Nivix Cyclops don't actually work with it. Something to keep in mind.

I cannot reccomend Kiln Fiend enough for this, its Nivix Cyclops without defender and is an cheaper but it doesn't have as much defence so I understand it not suiting your deck style, but other than that this is a stellar and really fun deck!

What route are you trying to take with this because if you are trying the Guttersnipe / Electrostatic Field route i'd honestly say you neeed far less creatures and far more instants and sorcs. I'd max at 16 creatures for that strat maybe less well to be fair whatever strat you are running with this it looks like you need less creatures. I'd say Niv-Mizzet, Parun and Crackling Drake have too high cmc to run in a 20 land deck. I'd say Nivix Cyclops is also too slow for the strat you are trying. If you want to run a prowess style thing though Slip Through Space is worth thinking about.

5c suicide rush (this deck archetype) is one of my old favorite decks, and the very first modern deck I ever built. I'm not sure if you want suggestions, but I have some.

In general, this deck seems to contradict itself. You want a turn three win, but then you also have tempo cards like remand, pact of negation, force of negation, and cantrips. I know it is tempting to put in cards like these to create consistency and protection, but the point of suicide rush (as I have seen it played, and as I have played it myself) is to win fast enough that consistency and protection in the mid and late game are meaningless. You don't want to wait until turn four to play kiln field and leave up mana for remand. I can understand the pact of negations, but I would still advise against those. Instead, I would go for defensive buff cards like Blossoming Defense . Furthermore, although I can understand cantrips, I personally would rather play a deck with more creatures, decreasing the need for cantrips, alongside dual nature cards like Slip Through Space . Also on the creatures, it seems like you have gone the wrong direction with Nivix Cyclops , making the curve higher instead of lower. In my versions of this deck I have played Monastery Swiftspear (which can also win turn three, and sometimes on turn 2), and my personal favorite, Immolating Souleater , making a total of 11-12 creatures. Furthermore, I was surprised to see that you aren't running both Assault Strobe and Tainted Strike , which are staples of the kiln fiend combo since they both make it very easy to win turn three with any of the creatures listed above. Finally, on the land base, in decks like this it would probably be better to protect your life total by playing fast lands and Gemstone Mine .

Then again, you might be going for tempo kiln fiend, and therefore my suggestions would be irrelevant

A Complete Hub Glossary for TappedOut

DarkStarStorm How about the following wording, just to keep it consistent with the other entries:

"a deck that gains advantages through casting instants and sorceries to support aggressive creatures like Nivix Cyclops or card advantage sources like Niv-Mizzet, Parun ."

Thanks for helping me out with this one, I was a little soft on it.

For the accordion, I'll start working on that tomorrow.