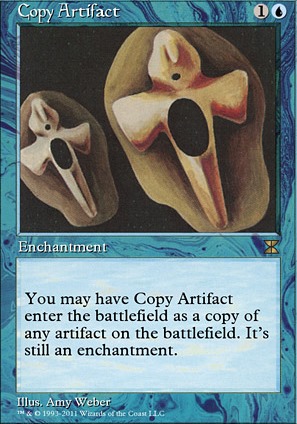 You may have Copy Artifact enter the battlefield as a copy of any artifact on the battlefield, except it's an enchantment in addition to its other types.

Copy Artifact occurrence in decks from the last year Taking suggestions from Ishmokin and making the following changes:

I must confess, I do love Kess

Yo drcatherwood, I play Kess quite a lot and I like the super combo feel ya did to your version! Have ever considered running the Underworld Breach combo with Lion's Eye Diamond? It goes in conjunction with Thassa's Oracle/Laboratory Maniac/Jace, Wielder of Mysteries line. Another cool line that you can run that goes hand in hand with a lot of your cards is adding in Copy Artifact to go Twin Scepter combo, add in Reality Shift or Lightning Bolt than you can either bolt people to death or Reality Shift their whole deck provided they have a creature on the field. Another thing since ya added Swan Song, you can go make infinite birdies as well.

What about Copy Artifact? It's fine as a value piece, the UU is not that big of a deal in a two colored deck and it double scepter can be an alternate wincon. Think it might be better than Steal Enchantment here.

Last_Laugh thank you for your feedback and suggestions. Crystal Vein and Copy Artifact are really good, think i'll add them to my deck. Generator Servant is good but it's a creature and Proteus Staff would just become a situational card, not a certain win con. I know i miss some crazy cards like Grim Monolith or Mana Crypt but are too expensive for me at the moment, i'll buy them when i'll be in a stable situation

Crystal Vein, Generator Servant, and Copy Artifact are excellent pieces of ramp here. Grim Monolith also if you're ok with the Gold Bordered Championship Deck version... otherwise it's not worth the $$$.

Few suggestions I can see

Copy Artifact you can get another Mana Rock. Or have another Combo Stick

Also Notion Thief! That dude with a wheel effect is absolutely broken! flash him in when casting Windfall get 28 cards in hand.

Past in Flames is essentially Kess in a spell. Same as Underworld Breach

Just a few thoughts to help the flow a bit.

but over all looks good! +1