At the beginning of combat on your turn, each player puts the top three cards of their library into their graveyard.

I am the Millman
by probablywygo

Alesha, who Smiles at Commons
by rt29

Escape the Horror (Mambo No. 5)
by KllrRoboPenguin 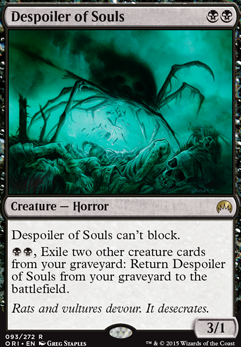 A card you might want to consider is Mindwrack Harpy for the self-Mill section in Budget. A card that would fit amazing in there with all of those creatures, death triggers and destruction is Syr Konrad, the Grim. Overall a great deck, pretty nice build!

Very interesting deck, but after seeing the list and the curve, I don't understand why you have 2 Mindwrack Harpy, seems extremely underwhelming. Is it that useful? Why not just run more of the good stuff that you only have 2 copies of instead?