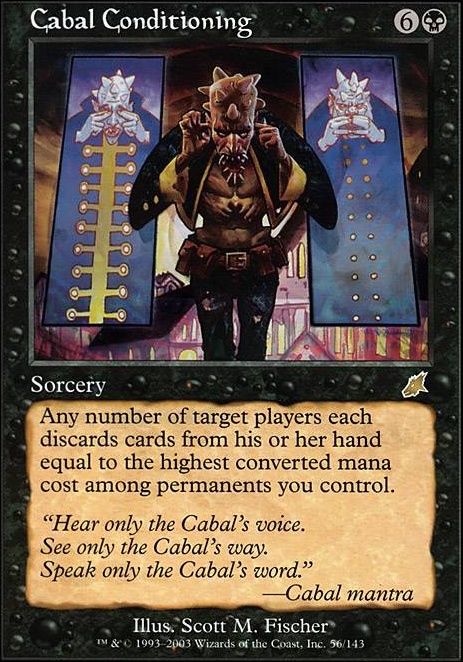 Any number of target players each discards a number of cards equal to the highest converted mana cost among permanents you control.

Nath of the Gilt-leaf
by Timystyles

Daedalus19876 Thank you very much for your feedback. The cards you mentioned from my maybes were pretty much the exact ones I've selected so that's very reassuring.

All the other suggestions are great, thank you. I was already swapping Luminarch Ascension for Bitterblossom so good to get your encouragement on that swap. I don't own Vampiric Tutor atm. My current budget substitute is Diabolic Intent which I could use for the same purpose. Any other card draw you could reccomend in place of Damnable Pact ? I just bought a copy of Tymna the Weaver so I guess I can swap in her for Pact. I think Altar's Reap is possibly weak too, but I do sorta like having a surprise instant speed sac effect.

I should have explained but I don't tend to run Toxic Deluge at the moment because there is one guy in our playgroup who always plays big mana big creature green based decks with commmanders including Arixmethes and xenagos. He also runs lots of cards that double creatures power and double +1+1 counters etc so the creatures often end up extremely big so Elenda, the Dusk Rose is often not the biggest creature and Toxic Deluge frustratingly is just not as good as usual against his decks as the amount of life you have to pay is sometimes huge and sometimes even unpayable. It's possible the card is still good enough tho and I should give it more of a try because maybe I've underestimated how I can gain that life back same turn or get to a life total where I can pay. I run Path to Exile over Swords to Plowshares for a similar reason but again I'm open to trying out Swords to Plowshares especially as this friend is moving this month so the meta is going to change.

This decklist is still in quite an experimental stage and The Elderspell is something I have been just trying, partly as an alt wincon with the new Liliana, Dreadhorde General . I agree that it seems loose and I should cut it for one of the ones you highly recommend like Reaper from the Abyss .

I have a copy of Bolas's Citadel and would never have thought of it for this deck so thanks so much for that idea. I'll def try it. I will add back Swiftfoot Boots too but I cut Lightning Greaves because it stops me targeting Elenda, the Dusk Rose with effects like Hatred and Shizo, Death's Storehouse . Do you def think Lightning Greaves is better given that drawback?

Do you think Cabal Conditioning could be worth trying as a late game finisher to tutor? Or does Sadistic Hypnotist fulfil that function well enough?

One new card I was extremely impressed with was God-Eternal Bontu I ended up 1v1 against my friend on a Ruric Thar deck and I was recurring Bontu and he was recurring Ilharg, the Raze-Boar and the card advantage from Bontu in a token deck won out.

Your deck was such a good staring point thank you. Certain synergies like Elspeth, Sun's Champion + Martyr's Cause are just so good!!

Your discard suite seems pretty well set up but you might consider Cabal Conditioning as its pretty flexible and will probably make sure EVERY hand is empty after its cast. With the amount of discard you have going on it seems like you may as well invest in some reanimation to take advantage of the resources placed there with cards like Rise of the Dark Realms.

Consider Leyline of the Void for some extra salt to go with the discard. You are running Cabal Coffers so why not run Urborg, Tomb of Yawgmoth as it helps with lands like Maze of Ith and others to add to the swamp count. Also, try Expedition Map since you have good land targets like Cabal Coffers and Cabal Stronghold to aim for.