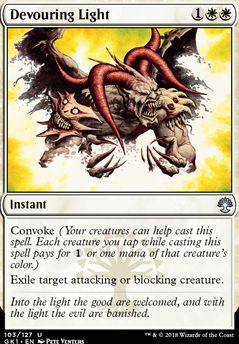 Devouring Light occurrence in decks from the last year 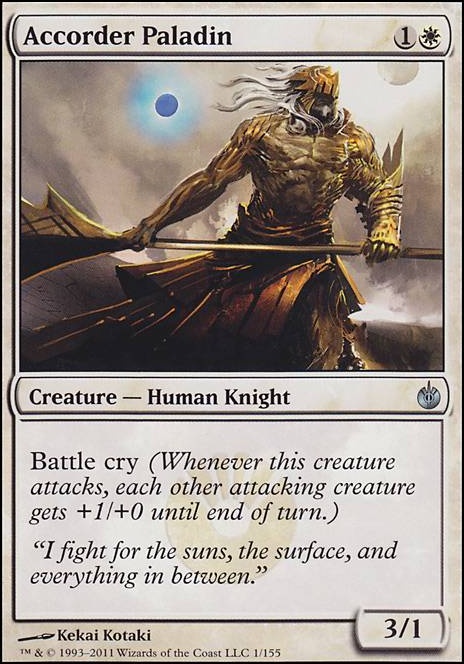 I would stick to either making tokens with Precinct Captain , and Secure the Wastes , or switch to more beefy solid creatures.

Maybe i should elaborate on the problem i have with this deck right now. In simple terms i dont know how to further improve the deck. Or to be more precise i lack the understanding of the required balance between card-mechanics.

For example i have 12 cards that can draw 10 ramp, 9 recursion cards, and so on. Prior to uploading this deck i had 9 single target removal spells in the deck, but i replaced Devouring Light and Absolver Thrull with Angel of Despair and Ghost Council of Orzhova , because i didnt count Ayli, Eternal Pilgrim as removal yet and to get one "remove anything" card into the deck.

I am almost certain that i have to many utility cards like Fanatical Devotion , Martyr's Cause , Teysa Karlov , ... as well as recursion cards in the deck. I think this deck might not have enough focus. But i cannot improve on this deck on my own anymore. Whenever i want to remove a card i find to important of a reason to not remove it. Hence why i wish for a broader community to judge my work.

Thanks roger3eme, that's a good suggestion! Devouring Light and Rogue's Gloves out for Thousand-Year Elixir and Brass Squire

Awesome deck. Personally I rather run some more Brimaz or Hero of Bladehold over Fiendslayer.

You have enough creatures to make Devouring Light valid to run. Declaration in Stone is a great middle ground as well.

Another solid addition to the 75 could be some Kitchen Finks.

If you have time check out my G/W Aggro deck. Lifted Research Group

I've got a good list of suggestions here for ya, I'm unsure if you're unwilling to order cards from TCGplayer, but

And finally, Wrath Effects I.E. Effects that destroy all creatures (see Wrath of God) are good for if your opponent summoned a big creature, or if the board is all gummed up. Wrath of god is a bit off budget, however, End Hostilities is less than a dollar, and is only 1 mana more and can also destroy equipments and stuff attached to creatures. Hour of Revelation only costs 3 mana if there's 10 or more things other than lands on the field, Can be nice, can be bad. My last suggestion here would be Dusk / Dawn which can leave your board clean and kill all other big creatures, then it can be cast from your graveyard to bring a bunch of your dead stuff back. Anyways, I'd love to help as much as I can, and I realize this is a ton of reading, sorry about that.