Captain Kurk and the Artifact Fleet
by Orcinbob 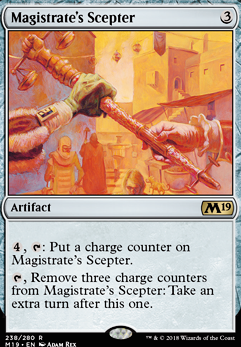 Built From Scratch Budget
by atingtdm Dreamstone Hedron is a bit expensive for the amount of ramp it gives you. Same with Hedron Archive. I would recomend replacing them with Thran Dynamo and Gilded Lotus.

I would recommend including Shimmer Myr as you would essentially be able to play about half your deck at instant speed.

You're right about Mycosynth Lattice + Vandalblast but, I would like to keep Darksteel Forge in this list, primarily for my playgroup. Maybe i should reconsider my decision about Darksteel Forge, I'll try your idea.I will consider notion theif & Recruiter of the Guard, I don't know why i didn't think of running those.

Alright now that the deck is complete, I can offer some suggestions.

more tutors/transmute (3 hard tutors are not enough in most cases), clock of omens to break orb parity, when it comes out- quicksmith spy, tezzeret, daretti spaghetti, Mycosynth Lattice + Vandalblast , scrap mastery and a mill theme?, the artifact lands possibly?

Gravestorm (not as useful without an infinite grave combo),

Alright DrCreamy and Bhaal666, now I can report after the first real playtest (although I haven't recieved Intuition and Transmute Artifact yet) in both 2 Player and 4 Player games:

The 1 vs 1 experience was against a mono b deck with Mikaeus, the Unhallowed and against someone with a Vendilion Clique deck, but for French commander (the only one I've seen here so far). Mikaeus was tough, as it can outrun the stax effects with massive mana production and it also has a shitload of mass removal in it...and Combos that can hit unexpectedly and are hard to break in the late game. I started quite well with an early Lodestone Golem and Daretti, Ingenious Iconoclast followed by Deepglow Skate. Golem was removed just before deepglow skate enabled the ultimate of Daretti, which then returned 3 copies of the Golem to the battlefield. Opponent had Liliana of the Dark Realms and managed to kill all three Golem copies within one turn again...all of this this pretty much happened in the early/mid game. Eventually I managed to pull off the Mycosynth Lattice + Vandalblast trick, which ended the game despite Mikaeus being on the board. Goblin Welder removed a Myr Battlesphere that came back with Mikaeus' ability and that was the last threat on the board.

Vendilion Clique was an interesting matchup because I didn't know what the deck even wanted to achieve. It was all about Counters and I was told that it was based on Polymorph and similar effects with Emrakul, the Aeons Torn and the commander being the only creatures in the deck. I think we played two or three games and luckily I didn't see this Combo in Action in any of the games. I won one game with Aetherflux Reservoir, one with Ravages of War and I think one with combat damage. I had the Feeling that I simply play too many must-counter threats in my deck and too many stuff that reinforces mana Problems on the opponent's side that my opponent could have focused enough on finding his Combo but it could have been very bad luck as well. Once the Polymorph had to be pitched for Force of Will to Counter a game winner on my side and that after my Opponent had drawn two extra Cards, hoping to find another blue spell...

Against such decks I might add Grafdigger's Cage (still don't have one though), but it also prevents some of my own tricks, for example bringing back creatures with Sun Titan or Goblin Welder and Daretti, Scrap Savant...probably not worth it here.

The multiplayer game was very interesting and it was a high quality match: Hermit Druid Combo, The Mimeoplasm and the new Cascade preconstructed deck with a few adaptions

As you may know, hermit druid is bound to kill on turn 3 or 4 and it does that with lots of backup and quite consistently. For the new player it was more like a Magic lesson than a real game because although we played for more than 60 minutes before conceding due to the late hour, he was only able to play like 2 spells throughout the whole game.

Druid started, took my Mana Drain with Duress. I played Mishra's Workshop, Talisman of Progress and Scroll Rack, Mimeoplasm started with Sol Ring and Sensei's Divining Top. In turn two I went berserk with Chromatic Lantern, found Mana Crypt on top with Scroll Rack and then used my Demonic Tutor from the starting Hand to get Sphere of Resistance and Play it. We were mildly amused at the fact that I had 8 mana on turn 2 and with the duals, shockland and fetchland expeditions used by the hermit player we had like 2000 euros lying on the table. Eventually I got Lodestone Golem, Thorn of Amethyst, Tezzeret the Seeker and Umezawa's Jitte out (which kept the hermit from going wild), the mimeoplasm player had a shitload of mana, Wurmcoil Engine that kept me from hitting him and the cascade guy had a Simic Signet (lol). Mr. Cascade then bounced everything with Devastation Tide, but as my turn was after his and before mimeoplasm and hermit I was able to play all my mana and taxing stuff again on my turn, thus keeping the hermit from killing us all.

I found that in such a game I was struggling to find more useful stax pieces because I had cut some possible Solutions in favour of aggro and Combo parts. I might have tried to go for a lifelink attack and then use Aetherflux Reservoir to kill the mimeoplasm player if we had kept on playing (until then I had only lost like 3 life or so) but until we quit I never found the time and mana to actually search for and cast the needed Cards.

There's only one more commander session before Christmas, but maybe I can collect enough Information on which Cards are useful in practice and which I often don't want to see on my Hand or don't want to tutor for...

They Knight be Giants

Your deck is really different from most daretti lists. You're playing many creatures and less combo and control stuff. How about playing Karn, Silver Golem, Darksteel Forge, Mycosynth Lattice + Vandalblast , Mana Vault, Basalt Monolith and Rings of Brighthearth?

SmokeyBear15: Hey! Thanks for the +1! Glad you like the deck. I would be happy to answer your questions, and any more you may have.

1) Basalt Monolith is always used. It's there for the ramp, of course. It's also there for sac fodder. It is also there for infinite combos (mana, card draw, etc.). It will always have use, one way or another. Dreamstone Hedron is too high costed if you ask me. Yes, it will draw you cards, but Hedron Archive is much better. But, it's not a bad choice in a budget build.

2) Codex Shredder isn't really used for the mill. If it's out. I'll use it, but on my opponent. I prefer to know what's going into my graveyard instead of a random flip. It's mainly used as a way to reuse my non-artifacts that have been pitched. It's almost like Recoup, but it affects more than just sorceries, doesn't exile them after use, and is even recurrable.

3) Staff of Nin has been in and out of my deck quite often. At the moment, it is replacing Mind's Eye, as it is a guaranteed extra card with no mana requirements. It can also go infinite with Voltaic Key, Rings of Brighthearth, and infinite mana. It's definitely been doing some work.

4) Trading Post is another card that's been in and out for quite some time. It's not a bad card and sees play in most lists. At the time, however, I don't see the need for it.

5) There's quite a few. Infinite slaver lock. Mycosynth Lattice + Vandalblast . Scrap Mastery'ing back a huge graveyard is always fun for me. Lol. For the most part, it's a different win each time I play. There's always the classics tho. :)

abzanforever: Unwinding Clock is used to simultaneously untap all my artifacts, whether it be mana rocks or artifact creatures that have attacked. I don't necessarily care about flashing in things, but it may be worth considering running Vedalken Orrery.

Mycosynth Lattice + Vandalblast isn't used necessarily as a board wipe or combo, it's a win condition. Hard for anyone to come back after that. I don't like running MLD as I feel that's better suited for a Stax deck. Same goes for board wipes. All Is Dust, Starstorm, Comet Storm, Ugin, the Spirit Dragon, etc the only types of wipes I will run.