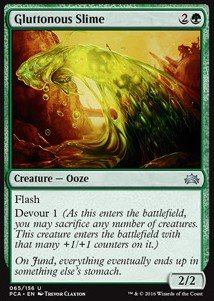 TMNT2: The Secret of The Ooze
by Bigbenmeaige 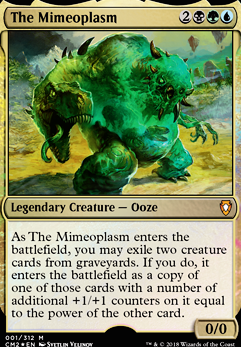 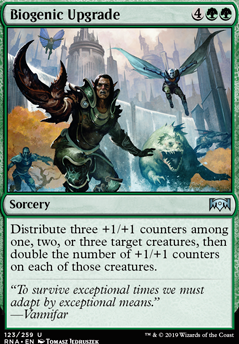 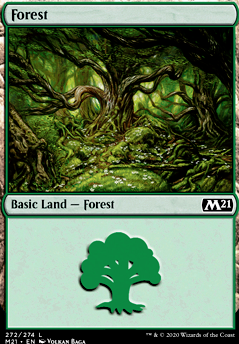 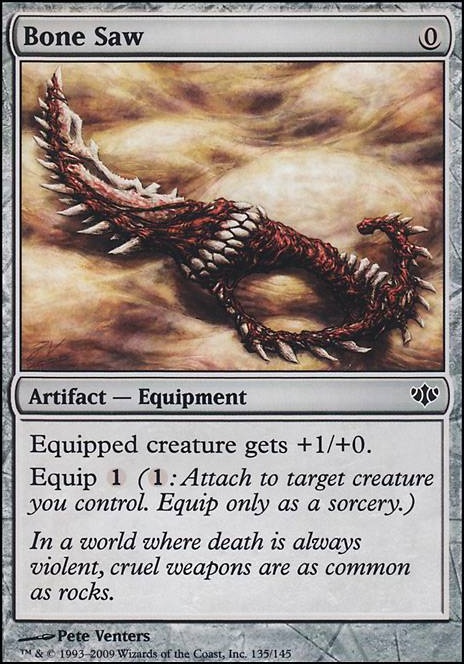 @AwesomeName Thanks for the suggestions! I did consider adding Experiment One (I have a playset lol) but I opted to go with Servant of the Scale because although he doesn't dodge removal persay like Experiment One does, when he is hit with removal (as long as it doesn't bounce or exile, which regenerate doesn't dodge anyways) he can make one of my other threats stronger with his "die move", instead of leaving me with just a much weaker Experiment One. He also doesn't enter the battlefield with counters to start unless he is Savage Summoninged, so I don't get an immediate benefit from Hardened Scales.

As for Predator Ooze, he also doesn't enter with any counters and doesn't provide me any other benefit other than an inevitable clock (unless bounced or exiled). Gluttonous Slime allows me to effectively negate spells that target my other creatures by absorbing their power since I can cast him at instant speed, whereas Gristleback can enter with a counter on it and provides life gain versus other aggro decks if needed. Also Predator Ooze is more expensive lmao.

Scavenging Ooze Is a great suggestion, I would really like to add him in place of like the Gristlebacks or something but I'm not willing to drop 20$ on a playset right now. Maybe in the future!

Strangleroot Geist also sounds like a great addition, I will definitely be testing those out. I totally missed those interactions when I was thinking about what to add to this deck, so thanks for pointing those out.

Avatar of the Resolute. This one looks good on paper but I feel like against some/most decks they won't be allowing my creatures to stick for long, so it wouldn't be providing a lot of lategame benefit for me. The lategame is also why I have the hydras in here since they scale throughout the game with their x costs. I will definitely be testing this one though and if in most games my creatures stick then I will consider adding this one.

Thank you for your suggestions, they were very helpful!

I don't really like Skarrgan Pit-Skulk because I can't reliably get damage in until like turn 3 in a perfect world and it could still get removed or blocked. It's more of a high risk reward type of thing whether I can proc it or not. So actually I may look into that still, idk.

Idk if I can get behind Simic Initiate, cause you can only distribute one counter at a time and I feel like that's too slow for my liking.

Also Hangarback Walker= rip wallet, I wish though. That would be fantastic.