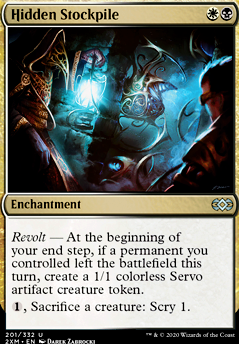 Revolt â At the beginning of your end step, if a permanent you controlled left the battlefield this turn, create a 1/1 colourless Servo artifact creature token.

Hidden Stockpile occurrence in decks from the last year

All Life Matters
by StumpyIB 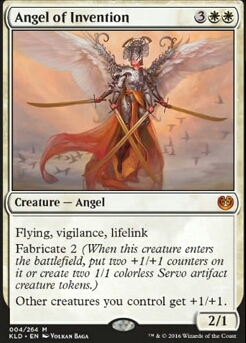 DemonDragonJ Make it Scry 1. Hedron Alignment, Hidden Stockpile, Riddleform. Most of the repeatable Scry variants I find is a very low Scry amount for a not insignificant payment.

Have you considered Hidden Stockpile? It would fit nicely here and would smooth your draws, have a steady sack outlet and a servo every turn.

RNR_Gaming I have both White Sun's Zenith and Swords to Plowshares I just don't know what I should remove from my current deck to add them in! Also, Hidden Stockpile is something i'll definitely have to add along with Spawning Pit . Both Vindicate and Anguished Unmaking are great cards but they are out of my budget but if I could trade with anyone at my local magic shop for these cards i'll be sure to look out for them!

Also, I noticed you have very little interaction

1) Swords to Plowshares - is probably whites best removal spell definitely pick one up :)

2) Disenchant - lots of pesky stax cards can get in the way of your token army; most decks try to have some way to deal with em. Granted, Anguished Unmaking and Vindicate are just better I'm not really sure what your price point is on a card.

Cool deck! I see some familiar faces in the deck I made a ways back so basically its just twilight. Have you considered Hidden Stockpile as a creature gen/sac outlet/scry machine? I found it is an extremely useful card, in conjunction with Blood Artist in my deck, but I thought you might find it useful as well.

Kjartan I see what you mean for most of your points, but I'm also a bit confused on them too. Firstly, you say it doesn't need to be fast, just fast enough. I sort of see what you mean because it does need some setting up to work, but what kind of synergy am I looking for? Is the idea of using Hangarback Walker and Walking Ballista a part of that? What kind of mechanics would make this fast enough? Secondly, Vexing Devil . I don't understand and how the card doesn't fit or what makes it something to be on the fence about. Ultimately, this deck damages my opponents down, atleast the way I'm starting to understand it. Devil does this, and like you said, it pairs fairly well with Hidden Stockpile . I guess I don't see where your doubts on it are coming from. And lastly, Chromatic Sphere vs Chromatic Star . They basically do the same thing, except star needs to ping the graveyard, which from how I see it, is slightly less reliable. So why suggest it? And I was also curious of your thoughts on Impact Tremors . It works with stockpile, but I wasn't sure about it as I'm not going to be running creatures reliably, atleast as the deck sits now and as I understand it. So I'm on the fence about it, but is there a different perspective on it all that I should see? And should I keep the average cmc at about 3, where it currently is?