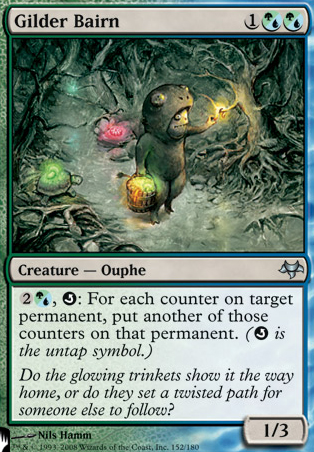 , : For each counter on target permanent, put another of those counters on that permanent.

Kraj Has A Experimental Phase
by HydraDragon

Omnath, Locus of the Roil EDH

For this deck, I'm thinking Ghost of Ramirez DePietro and Kodama of the East Tree as commanders.

Super round about way of doing this, but if you can generate obscene amounts of mana and can enchant Gilder Bairn with something that taps it (like Paradise Mantle), you could go off and generate lots of counters.

Nice list. Hereâs my suggestions: Doubling Season (youâre running craterhoof so I donât see how this shouldnât be included), Karn's Bastion (not great but is sometimes just enough), Gilder Bairn + Paradise Mantle (can be infinite with another enabler but good enough as is). You should consider running any other decent walkers that ult at 2x devotion. Look at The Ozolith as well.