Companion â No card in your starting deck has more than one of the same mana symbol in its mana cost. (For example, you cannot have Kitchen Finks in your deck but you can have Carnival / Carnage) (You may reveal this card from outside the game before you start and declare it as your companion. If you do, your deck must follow the companion's restrictions. You may pay to put this companion from your sideboard to your hand at any time you could cast a sorcery. This action can't be interacted with or countered. You may only choose one companion for your deck before the start of each round.) 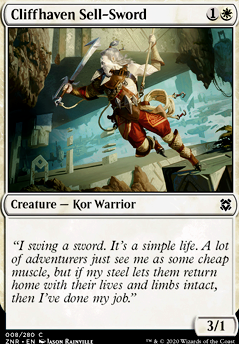 Sisay Shrines (Made Progress)
by DreadKhan

Jodah Reaches the End of the Maze
by 205cwood

If you like Sanguine Bond, you could try Vito, Thorn of the Dusk Rose and Heartless Hidetsugu, which Sisay can fetch out for you when you're ready to win. Just activate Vito, then activate Heartless to win.

The Royal Scions and Rhys the Redeemed are a good way to kickstart Sisay, so you can find almost anything else you'd want after (this allows you to fetch 7 drops, including Chromatic Orrery, which will let you activate Sisay again immediately). If it isn't, something like Judith, the Scourge Diva gives another +1 and fills out your colours, so you can fetch up to a 9 MV Legendary, in addition to being able to swing with a 10 power First Strike Trample Sisay. Jegantha, the Wellspring is a handy card in a deck like this, probably in the 99, but some people run it as a Companion even. Faeburrow Elder and if you have the budget Bloom Tender are both very good inclusions if you are already running untap enchantments/effects, as is Ley Weaver. She goes infinite with lands and Freed from the Real, and her Partner, Lore Weaver just wins on the spot with infinite mana via decking everyone else. It's cute that they find each other, but it also means you get access to them more often.

Lots of cool stuff in here to think about for my own Sisay WIP! Hope these ideas aren't too 'try hard' for you!

I assume Jegantha, the Wellspring is meant to be your companion, and not part of your maindeck? If so, you should have its entry in your sideboard, not the mainboard. If youâre wanting to have it stand out more as something you have access to, chuck CMPN (with stars) after its entry, like below (it has to be in the sideboard for this to work)

Outside of that, my suggestion would be to drop your land count. 25 is really excessive when all your cards cost 1-2 mana, and generally speaking you can get by fine on 2 lands. The exception is Banefire, but thatâs a bad card so iâd suggest ditching that entirely, and going down to 20-21 lands

Hey, I have some suggestions for this deck based on some other decks I've used or played against.

I've used Domri, Anarch of Bolas to great effect in my own dragon deck, since she gives mana fixing, protection from counterspells, and creature removal.

Based on how there are zero basic lands in this deck, Realms Uncharted could be a very good way to get your mana rounded out, and to thin the deck later on.

Jegantha, the Wellspring is perfect for you commander. You wouldn't get to use the Companion ability but with 21 gold cards I think it would still go a long way

With over a quarter of the entire deck being creatures or planeswalkers, using Esika, God of the Tree Â Flip's flip side can cycle all your fun stuff out a lot faster (I also think the showcase art looks fantastic).

In my opinion, Rishkar's Expertise, Primal Command, and Gaea's Blessing can fit in almost every green deck. They're versatile, and card draw in never hurt anyone too much.

I hope at least some of these helped! There are some other cards that might be good but I wasn't sure what aspect of the deck you'd want to focus on, so I tried to suggest things that would keep options open. Keep slamming those playtests and keep us updated on how it goes!

Unlife Pairing Vial Smasher the Fierce and The Prismatic Piper And doing Jund high CMC is up my alley.

DrukenReaps im so down to build a colorless deck, but I'd pick an eldrazi

RambIe Jodah, Archmage Eternal and Jegantha, the Wellspring would be neat off theme