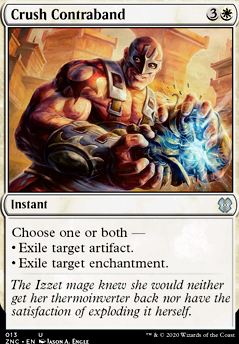 Choose one or boh â

Who Needs Green Anyway?
by StaffOfSage

Let's Build Isamaru, Hound of Konda on a Budget!
by MTGBurgeoning

I would recommend replacing Ruinous Ultimatum with some easier to cast removal: Curtains Fall, Ashes to Ashes, Heliod's Intervention, By Force, Crush Contraband, Anguished Unmaking. Springleaf Drum is solid ramp. I don't see what's the point of Phyrexian Altar when you aren't running either Oathsworn Vampire or Cloudstone Curio. I would have several more suggestions, but rather then write them all, I'm just going to direct you to my list: Edgar Aggro

So Angelic Purge was meant to double as a Sac outlet and a way to exile something pesky. It looks like Crush Contraband would be a good substitution. Thanks! I appreciate your feedback and ideas.

Haha sorry I'm leaving so many comments, I've been playing this deck on the PlayEDH server at the High level recently. I have a question about Angelic Purge -- why is it in the deck? Doesn't it always counter itself every time because when you sacrifice the Child of Alara, all non-land permanents get destroyed first, so the Angelic Purge will fail to exile its target? I'm replacing it with Crush Contraband because I recently got destroyed by Rest in Peace, which completely blocks Child of Alara's ability.

You'll also want some removal for your deck. Cards that would be good for this are Swords to Plowshares , Valorous Stance, Condemn , and Settle the Wreckage to keep the big creatures away from you.

There is also artifact/enchantment removal you should have like Crush Contraband , Aura of Silence which can also slow your opponents down, and Forsake the Worldly which can also be cycled away for 1 card.

Some board wipes can also be very good like Cleansing Nova , Fumigate , Mass Calcify this one costs a lot of mana so I wouldn't recommend it too much , Rout which has the advantage of being able to be used at instant speed. There is also Martial Coup which if you put enough mana into it then you'll have some soldiers on board after everything is over.

May I suggest and UPGRADE: Fate Forgotten to Forsake the Worldly

Or Crush Contraband, this one have grown up on me :P

You have a single piece of artifact/enchantment removal and it requires haste to work on the same turn (Devout Chaplain). There are tons of artifacts/enchantments that hard counter your strategy such as Rest in Peace, Leyline of the Void, Ensnaring Bridge, Island Sanctuary, etc. Make sure to include answer to these as they are commonly played. Stuff like Heliod's Intervention, Return to Dust, Crush Contraband, Vandalblast, Generous Gift, etc.

Your deck is quite reliant on it's board presence so back to back wraths will leave you with only your kitty cat and indestructible only protects it from a limited amount of wraths. Toxic Deluge, Terminus, Evacuation, Cyclonic Rift, etc. all get around indestructible. I'm I big fan of the blinking your board out with Eerie Interlude and Ghostway to protect your board from wraths as they protect from the above board wipes and trigger sweet ETBs.

On the off chance the kitty cat gets to go for the voltron kill make sure you have a way to give it hexproof or shroud. Swiftfoot Boots and Lightning Greaves are fairly useful for granting haste and protecting key creatures. I think they are worth a look.