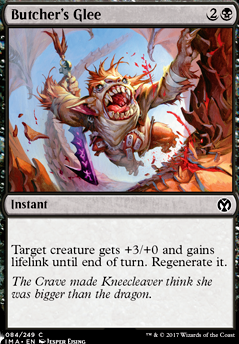 Target creature gets +3/+0 and gains lifelink until end of turn. Regenerate it. (Damage dealt by a creature with lifelink also causes its controller to gain that much life.)

The 3 Gnarled Scarhide (they'd die) and a Butcher's Glee . If the deck was made more Heartless Summoning-focused I'd also cut the rest of the Butcher's Glee and 2 Titan's Strength (or any 3 other spells) to make room for the rest of the Kragma Warcaller s and Ragemonger s, since they're what let the deck go crazy with Summoning. It could also be worth experimenting with cutting 1 or 2 lands, Summoning + Ragemonger will give you discounts and 20 is enough to get you to 4 lands on curve around 60% of the time (probably the max amount of mana you'd need with Summoning).

I would remove Butcher's Glee and Coat with Venom for more lands. 24 lands is generally the standard for a deck. If you don't enough enough lands, you won't be able to cast your big creatures in a timely manner. And I say Glee/Venom because you don't have enough early-game creatures to make those cards really worthwhile.

Do you have the same sleeves as me? "mmm Brains"? lol, love them Zombies.

I tried the same route once with the Whip of Erebos but found I hated the "exile it at end step" and thus NEVER used it... especially with Zombies... if nothing else swap it for the Bows's in your sideboard. It also works against your 3x Colossus's, 4x Gravecrawler's, and the 4x Amalgam's...

If it is the Lifelink you want I'd try the route of something like Grotesque Mutation, Butcher's Glee, Cruel Feeding, or Cutthroat Maneuver... all at instant speeds.

Figured i'd mention a couple other thoughts for you....

and I will always mention these 2 for a Zombie deck without them Geralf's Messenger and Undying Evil, both are fun.

Good luck with the Zombies...

TheMountainLion on I'm trying to bring the â¦

Some things I'm trying to decide between are:

*Butcher's Glee or Dark Dabbling or Wail of the Nim

*I'm thinking of not using Lightning Bolt in favor of any of the 2CMC instant or sorcery cards (too many to list) that deal at least 3 damage to save on $.

Other cards I'm trying to decide whether to leave in or take out are Satyr Firedancer, Howl of the Horde, Dash Hopes, Brimstone Volley, Searing Blaze, and Mizzium Mortars.

(You may notice all the cards mentioned here are at x2, which is so I can see which ones I'm thinking about)

Any and all thoughts are welcome (I realize the mana is low but I thought the deck could pull it off?)

Providence - If your goofing around it will be funny to make your life total 26, especially if your opponent gets you to a low life total.

Could splash black for Ayli, Eternal Pilgrim. Her ability to gain life is good and her second ability to destroy stuff when your life is over 30 is even funnier. Could be even funnier to combo her with Tree of Perdition to gain 13 life.

If you splash black, you can get Grotesque Mutation and Butcher's Glee to pump your creatures and give them lifelink.

Indulgent Aristocrat - 1 drop lifelinker to get you started.