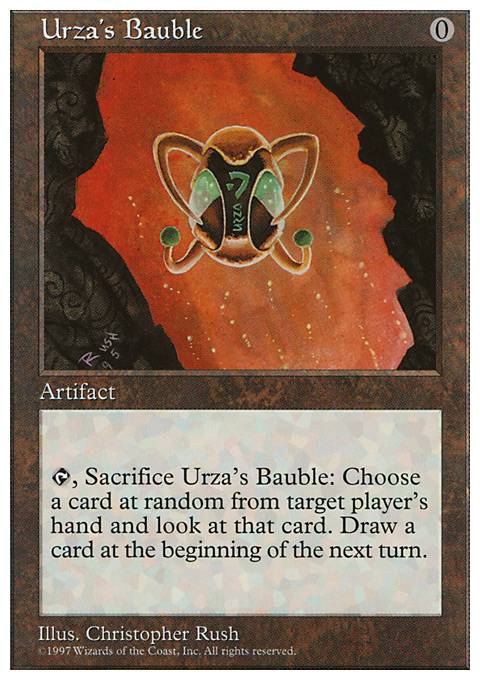 Tap, Sacrifice Urza s Bauble: Look at a card at random in target player's hand. You draw a card at the beginning of the next turn's upkeep. 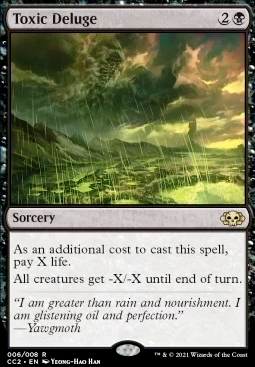 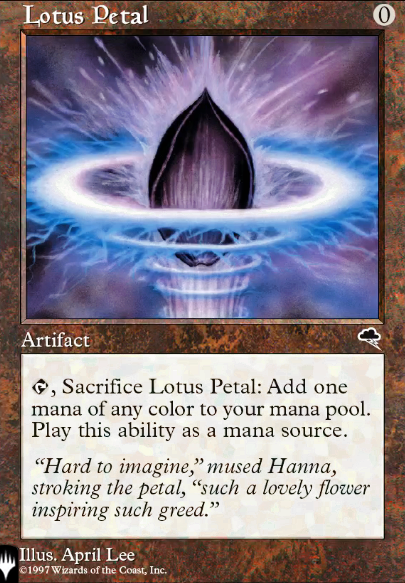 Mana Tithe is a white counterspell that you might find appealing. There's also Lapse of Certainty and Rebuff the Wicked .

For draw, I'd add Ichor Wellspring . Drawing two cards and being a good two-mana stepping stone towards your combo pieces is pretty great. Other cards that come to mind for a combo deck like this are Mind Stone , Lightning Greaves , Illusionist's Bracers , Phyrexian Revoker , Crashing Drawbridge . Treasure Vault can give you infinite sac tokens/colored mana. You also might want to add Urza's Bauble and Mishra's Bauble .

Thanks for the upvote! I just finished my Osgir deck earlier and this looks like a much more tuned version of mine :o

Few cards that might be worth lookin into are the bauble cycle ( Mishra's Bauble and Urza's Bauble ). Not super powerful, but getting a few more draws for free can't ever hurt, right? I slid in an Ashnod's Coupon in mine as a proxy for Urza's Bauble, but like cmon, you just gotta! That's 3 drinks!! You def are lookin more to be fun, but if you wanna be degenerate sometimes, Osgir is a great place for Zirda, the Dawnwaker and Basalt Monolith to play :D You already got the zirda, chuckin in the monolith and Staff of Domination plus a good ol Mycosynth Lattice means you just get to cast your whole deck and copy every artifact in it! I'm always a fan of all in strategies like that, but whackin somebody with big meaty golems never feels bad..

Hey Broviticus, thanks for stopping by. Really appreciate the comment, question, and upvote.

Also thanks for catching the fact that Alibou, Ancient Witness is in fact an artifact. I put that update together pretty late last night, and was quite tired. Being an artifact does make it more appealing, but as you mention, I'm not exactly sure what to cut to add it.

The original thought behind not including Coveted Jewel / Hedron Archive is the high CMC. When adding ramp cards and specifically mana rocks, I was looking for 2CMC rocks in order to help get the commander out a turn early. I was also concerned about opponents stealing Coveted Jewel , but you make an excellent point it could just be scarified in response. I may be looking to add this in the future since it does have some serious late game potential. Mind Stone was in the original draft, but seems to be missing from the maybeboard for some reason. I decided to cut this for more efficient card draw options such as Ichor Wellspring / Mishra's Bauble / Urza's Bauble .

Glad someone finally noticed the FMA theme. Just recently finished watching it all the way through for the first time, and I have to say, it's definitely in my top 5 now. Thanks again for the upvote. Cheers.