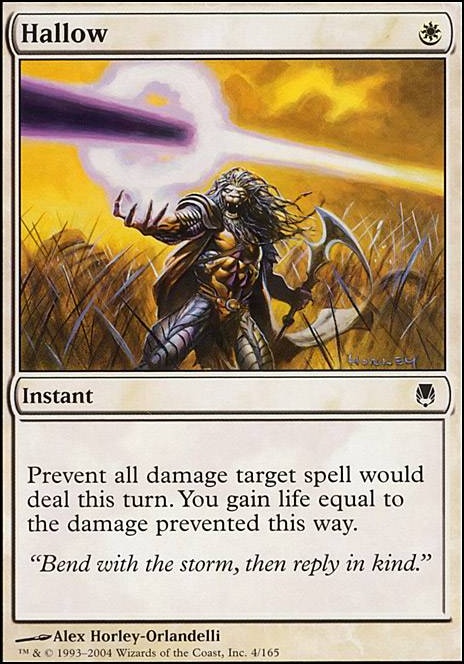 Prevent all damage target spell would deal this turn. You gain life equal to the damage prevented this way.

Tylord2894 on Which effects on spells carry â¦

In general when something moves between zones, it doesn't remember what was affecting it. There are exceptions and things to keep in mind, but targeting a creature spell will, for the most part, not affect the creature permanent that will be put into the battlefield.

There are a 9 exceptions to the "things moving between zones create new objects" rule. For brevity, I will not reference them, but you can find them in 400.7 of the CR (link here). The most pertinent of these exceptions for your examples is the second one, which deals with prevention effects. In your example where you cast Hallow on a hasty dragon, that dragon permanent will remember that you cast Hallow on it. Damage will be prevented, and you will gain life as that is a single prevention effect.

However, your second example does not work as described but could. When you cast Alter Reality on Abomination, you changed the wording on that spell but the permanent. In other words, the creature that enters the battlefield will not have it's ability altered. Of course, you could also cast Alter Reality targeting the creature on the battlefield. That would have the desired effect. A very important note, if you read the Gatherer rulings for Alter Reality, the last ruling will say that a spell that becomes a permanent retains any changes that you made. The rulings on the Gatherer are very rarely updated, and I'm inclined to believe this is outdated (as many rulings from 15+ years ago often are). Nowhere in the rules that talk about text-changing effects nor what traits objects remember is this discussed or referenced. That said, I could be off-base here, but that is the conclusion I came to after doing some digging.

Lastly, Un-Set cards don't really follow the rules. You just need to come to a consensus at your table.

Yesterday on Which effects on spells carry â¦

I just remembered something that happened when I was playing... Magic Duals 2013?

I cast a hasty dragon that could swing in for lethal damage, then screwing around as the game was over, I cast Hallow targeting the dragon spell on the stack. Then swung in for ~7, but the opponent didn't take that damage and I gained that much life instead.

That makes sense, right? Equally, if a Alter Reality targets an Abomination on the stack to turn "White" to "Black" in its text, it would resolve to become a creature with lethal blocks on green or black creatures? Or something similar with More or Less I guess.

Can somebody please show me any relevant rulings for what modifications you can make to a spell that carry over to it as a permanent? I don't know how to look this up really.

antacidbrn on I am tired of losing â¦

Hallow seems like a neat spell! For only 1 mana, that is a lot of value. It also turns off spectacle and Skewer the Critics. I just hate that I have to go card for card with the burn player and wait, but it might be worth it.

Would running Leyline of Sanctity mainboard be a possibility?

And yes, there are at least 4 burn decks in a meta of 12-15 decks so I think optimizing to beat burn would take me far. However, Primevil Titan decks seem to be winning every week.

First, in the future please use the Rules Q&A section when you have questions about rules, cards, or card interactions. It has some added functionality, including the ability to âMark as Answerâ a post to show your question has been resolved.

I have gone ahead and moved this thread for you.

This will not work as damage and loss of life are different. Damage occurs when a spell or ability specifically says you take damage, such as Lightning Bolt or Fanatical Firebrand , or through combat damage.

Loss of life occurs when your life total decreases.

*There are some replacement effects where damage does not cause loss of life, the most common being Infect and damage prevention, such as with Hallow .

I'm planning on using Hallow on Spoils of the Vault . Will this work when a card says lose 1 life as opposed to deals 1 damage?

Hey man! This is Phunlife from XMage. I've been really busy as of late so I've just got to looking at this. I did have it saved though so I would remember to come back and look at it.

Overall, looks good! I do have a couple suggestions for the sideboard though, especially if you want this to compete against top tiers -

I don't understand what exactly Hallow is for or what matchup it could be good in - maybe Tron's Rolling Thunder ? But even so, it feels like a very narrow sideboard card, and I think it could be cut. Maybe Prismatic Strands would be of interest to protect against Burn, or Lone Missionary as additional life gain as well as a body on the field. But Hallow just overall seems like it could be useful in a handful of situations to me.

With both Orzhov Pestilence and Tron on the rise, I'd look into Palace Sentinels as a 2-of in the sideboard. Both of those decks can easily take you to the late game, and without a card advantage engine I think you're lost against them. It's especially good against Orzhov if you can steal the Monarch from them too :D.

drakendark Lookin good...I think you will like Harsh Sustenance , it will win you some games. As far as side board, decks like this are very prone to heavy burn... Electrickery is a staple in Pauper and could ruin you day. My side-board choices for decks like this usually involve lots of protection, for example: Circle of Protection: Red , Apostle's Blessing , Prismatic Strands and Hallow are a few examples that I use. PS Dawn Charm is a good choice also, very versatile card!